For decades, he’s stayed on – a permanent guest in the luxurious country house of its former owner, whilst he fights an interminable court case.

But now Olga Petrovna, the newlywed young mistress of the estate, is returning from St Petersburg with her government official husband and Kuzovkin is understandably concerned that things may be about to change.

What he isn’t anticipating is that, over the course of a drunken lunch, a wealthy neighbouring landowner (Richard McCabe’s vile Tropatchov) will deliberately humiliate him beyond endurance, goading him into revealing a long held secret.

Turgenev’s tragicomedy offers a couple of meaty roles for the lead actors but, with a longwinded first half, it’s no masterpiece. Its shortcomings are more than made up for after the interval, however, by a truly moving encounter between Glen’s shabby but morally dignified Kuzovkin and Lucy Briggs-Owen’s Olga Petrovna. And, as her new spouse Pavel, Alexander Vlahos plays his cards close to his chest – a young man who wants to put things in order but may not, one feels, turn out to be the perfect match for his vibrant, warm wife.

Please note: The role of Kuzovkin has since been taken over by Royal Shakespeare Company regular William Houston as Iain Glen has unfortunately had to withdraw from the production for health reasons. 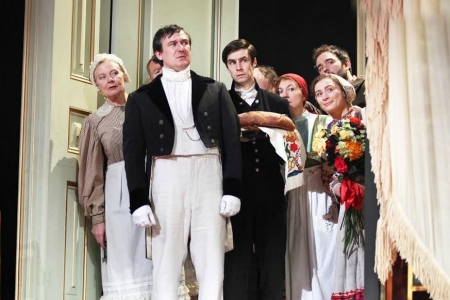 Leading the way: As New Zealand legalises gay marriage, is Australia getting left behind?