These days he’s better known for his film and television work, but, whether dressed in Scrooge’s nightgown and cap or smart top and tails, he hasn’t lost any of his comic timing or ability to hold an audience.

As Scrooge’s go, his Ebenezer isn’t an especially malevolent one, despite his careless treatment of Adeel Akhtar’s obedient, cringing Bob Cratchit.  It’s just that he’s a banker who  loves the hoard of gold he keeps locked away above anything else, and he can’t be bothered with anybody who’s unlikely to increase his fortune – in the eyes of this financier, charging 100% interest is absolutely fine. 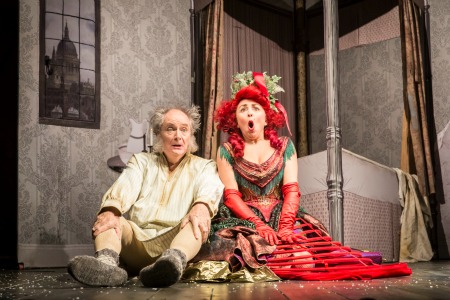 Designer Tom Pye frames the proceedings within a Victorian pop-up book within which a rotating set reveals the Cratchit family’s meagre abode and Scrooge’s cheerless bedroom where the Ghosts of Christmas Past, Present (Samantha Spiro in full party mode) and Future come to teach him a lesson before it’s too late.

A puppet Tiny Tim (one leg amputated below the knee) adds poignancy to Phelim McDermott’s often inventive production which sees Scrooge taking flight with a pair of fake legs.  And once the old curmudgeon begins to realise the error of his ways and all that he’s missed out on, it’s a pleasure to see him (a fully rounded human being at last) enjoying himself with the family which freely  welcomes him despite years of being spurned.

Flirting in Florence – a memorable night