With a mass of blonde hair and a teasing glint behind her dark glasses, Lott’s Holly sings “Moon River” accompanying herself on the guitar, and echoes a coltish Marilyn Monroe as she pursues her glamourous unconventional lifestyle, surrounded by wealthy guys who are more than happy to pay for her company yet, deep down, she’s yearning for true love. And there’s more than a hint of Cabaret’s Sally Bowles (Capote acknowledged the influence of Christopher Isherwood’s 1937 story on which both the play and the musical were based) in this tale of a good time girl who decided to reinvent herself. 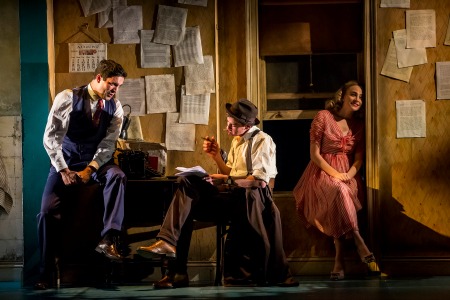 It’s a decent performance in a not altogether successful production, but you’re asking for trouble if you put a cute animal on stage – and incredibly chilled  rescue cat Bob steals the show, performing impeccably and crossing the stage with a bushy-tailed confidence, completely unfazed by the loud, brash party guys clamouring for Holly’s attention.