Theatre Review: The War of the Worlds

With its mix of live music, enormous projections of heat rays, fighting machines and tentacled Martians, this version of H.G. Wells’ 1897 science fiction novel is more rock concert than drama. Burst of green light pulsate round the auditorium, flames leap into the air and under-choreographed dancers writhe repetitively, representing the all-engulfing red weed. 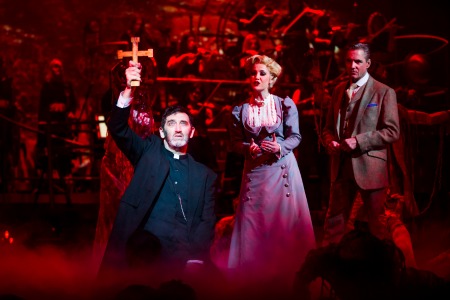 There’s way too much purposeless running to and fro across the stage and in this massive barn of a theatre, the live actors (often dwarfed by all the CGI) respond in different ways. As the narrator’s younger self, Michael Praed displays all the urgency of a man on a country ramble whilst his fiancée and the world as he knows it are under threat from the extra-terrestrial invaders. Jimmy Nail’s impassioned, deranged Parson Nathaniel goes the other way, emoting with abandon until groping appendages catch him in their fatal grasp. Former Sugababe Heidi Range acquits herself well enough as his wife Beth, whilst BRIT award-winner Daniel Bedingfield’s Artilleryman hits his high notes in a role originally sung (on the album) by David Essex who appears, now (with very little to do) as  The Voice of Humanity.

You’ll come away haunted by the music (the poignant “Forever Autumn” is still buzzing around my head days later), but the production itself, despite its scale and aspirations, will probably fade from memory as fast as the aliens themselves.

‘No resolve’ to ANC split – Zuma

The food of love: TNT’s rundown of the best Valentine’s Day dinners in London