The Radiohead frontman surprised fans at the legendary music event on Friday night, teaming up with the band’s longtime producer and Atoms for Peace bandmate Nigel Godrich.

Rumours were abuzz when Godrich tweeted a picture at the festival. 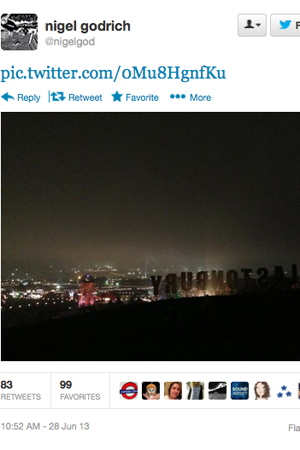 The pair’s set, which started at 1am, was performed in a VIP area for guests – some of the tracks dropped included Sexy MF by Prince, Fuck Tha Police by NWA, Once In A Lifetime by Talking Heads, 212 by Azealia Banks and Desmond Dekker’s 007.

Godrich took to Twitter afterwards to reveal they would be performing a similar gig the following night, writing, “Same time. Same place tomorrow.” Although, if the lack of reports reveal anything, it’s that this never went ahead.

Speaking of surprises, Alt-J still lead the polls in this year’s Splendour in the Grass mystery act. They just happen to be touring ‘around the same time’. Only time will tell…