We’re not just talking dipping your toe outside of your comfort zone; we’re talking living on the edge (sometimes literally) and experiencing travels from the most spine-tingling of perspectives. From scaling the frozen water of a waterfall, to ascending the tallest trees in the world, we’ve rounded up some of the top experiences that should be on everyone’s bucket lists. So, ditch the fear, mustle up your courage, and show us your mettle.

Get a head for heights up the CN tower, which soars above all the other Toronto skyscrapers. It’s described as the city’s ‘tallest extreme urban adventure’ and you can see why. Visitors to the EdgeWalk tread around a five-foot metal ledge which circles the top of the Tower’s main pod 1168ft above the ground. To put it into perspective, that’s more than 80 double decker buses balanced on top of one another.

Of course, participants are all safely strapped into harnesses which are clipped onto the overhead safety bar. However, with nothing to hold onto, you just have to put all your trust into the safety equipment. To make things a little bit more thrilling, once you get up there, try the go-to EdgeWalk pose, which involves leaning backwards off the ledge as if you’re about to abseil down. Rather you than us with that one.

Once you’ve conquered your nerves and stepped out onto the ledge, sweeping views of Toronto will be your prize. On one side, the urban jungle of the city is sprawled out beneath your feet, disappearing off into the distance. On the other, the Toronto port and extensive Lake Ontario spreads out to make you feel like you’re perching on the edge of the world. And, if you want to do something even more different, why not get married up there? (Yes, it is possible – if you have £3,000 to spare). The EdgeWalk experience costs £96, but the ticket also includes access to the Glass Floor, SkyPod and the slightly less terrifying movie and motion theatre ride. A keepsake video and photos will also be yours to take home after completing the feat.

Trolltunga (literally translated as ‘Troll’s Tongue’) overlooks the Ringedalsvatnet Lake close to the village of Tyssedal. This ascent isn’t for the faint hearted. However, if you do manage to survive the eight-hour climb, hike and cycle up, you’ll be rewarded with an epic view across the fjords. OpplevOdda organises group tours for £93 pe rperson, with all equipment included.

No, we don’t mean living life on the edge by bringing glass flutes instead of paper cups. Extreme picnicking is all about, well, picnicking in the most extreme place you can think of. Previous attempts have ranged from the acceptable (think folks on plastic chairs in the sea) to the practically insane, where people have dangled off a cliff on a bench to enjoy a bottle of beer. The more inventive the scene, the more kudos you receive. Just don’t be an idiot and make this picnic your last. 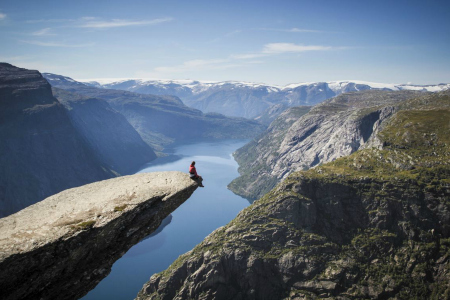 These trees are slightly different to the ones we used to climb in our back gardens at home. To begin with, they’re in America, crazily resistant to diseases – oh, and can reach over 350 feet tall, making them the tallest in the world. Growing along a narrow 450-mile stretch of land, from central California into the wilds of Oregon, the mighty trees tower over visitors. North Coast Adventure Centers gets dare-devils racing through the treetop canopies at heights of up to 100ft for just £45pp.

Adrenaline junkies who seek out the best frozen waterfalls to conquer are really icing with death (sorry). There’s not just danger from thin ice, avalanches or frostbite. Before undertaking a climb, you have to make sure the frozen waterfall is bonded to a base and wall of rocks – otherwise, th eice may collapse at any point, bringing you down with it. Gulp. If this still hasn’t deterred you, grab your ice axes and crampons and head to Colorado, the Canadian Rockies or Norway where the best climbing sites are. 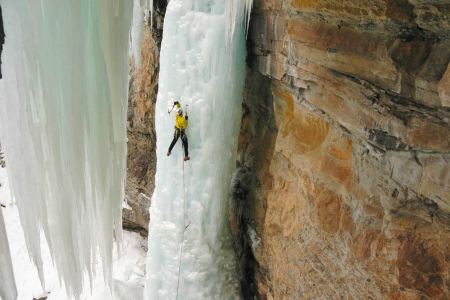 How the cracker became a Christmas dinner staple

The Conspirator: review and trailer

Blue boat and the Ocean in Cornwall