Touch the sky: London’s top places to test your vertigo

Compared with the likes of New York and Hong Kong, London doesn’t really do skyscrapers. But with the arrival of the Shard, Londoners have started looking up.

High altitude attractions are on the rise, but far from the ubiquitous, pricey lift-plus-viewing-platform combo found in NYC, this is vertiginous excitement London-style: a high-rise pop-up restaurant here; a unique monument there; a tranquil tucked-away roof garden over there.

It doesn’t get much more individual than London’s newest tower, the singularly peculiar ArcelorMittal Orbit.

Kapoor’s aim was to create something unstable, “never centred, never quite vertical” and he’s certainly achieved it.

Queuing under the huge trumpet-like structure hanging over the entrance builds a sense of excitement, heightened by travelling the 85m up in the metal lift and getting tantalising glimpses of the red spaghetti structure swirling through tiny portholes.

But once at the circular viewing platform, memories of the monstrous tower outside fade away.

Out of the floor-to-ceiling windows, it’s easy to spot Canary Wharf, the Shard, and other familiar landmarks; it’s fun, too, to be able to see the different shapes and structures that create the Olympic Park.

You can even look down into the stadium itself. Further afield, to someone used to looking down at London from the centre, it’s a new thrill to view the city from the east.

The winding trip down the 455 stairs feels like a journey back to earth, to a place where things conform; have symmetry; are comfortingly linear.

Orbit is a tantalising mix of many things: it’s both playful and pointless, a hybrid of abstract art and architecture; a feat of engineering that somehow also manages to be entertaining. 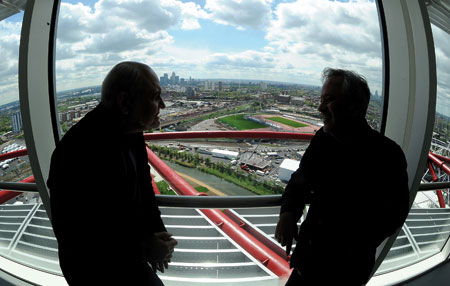 ‘Hybrid’ could be the new buzzword for experiences in London in 2012. For Londoners with adventurous tastebuds, a new breed of fusion cooking is emerging from the kitchens at newly opened restaurant, Sushisamba.

As the name suggests, Sushisamba offers a blend of Japanese, Brazilian and Peruvian food (stay with me).

The US chain has been serving its unique tropical taste sensations to New Yorkers since 1999, and in July, a branch finally arrived in London.

Not content with wowing your tastebuds, Sushisamba is also out to impress with the views from its tables on the 38th and 39th floors of one of London’s newest skyscrapers: Heron Tower.

Before you even get to the Brazilian churrasco and moqueca, Peruvian anticuchos and seviches, and Japanese tempura and sushi, there’s the “scenic” elevator ride.

Then, there’s the freshly muddled cocktails, premium sake collection and exotic spirits to choose from, best enjoyed along with the view from one of the two outdoor terraces that flank the restaurant.

Sushisamba is yet another notch on London’s diversity bedpost. And it certainly adds truth to the mantra that not all highs are the same.

The Voice beats BGT in the talent show ratings wars