Los Cristianos, in the south of the island, hits the sweet spot between the “drink all you can…throw up…do it all again” tackiness of Playa de la Américas and the gaudy Russian-ruled bling of Costa Adeje, two other nearby resorts on the Atlantic shoreline. A seemingly endless choice of restaurants, bars, cafes, pubs and tapas houses serve every kind of food and drink at prices so low they make you wonder if the decimal point has been put in the wrong place; the going rate for a pint of lager is the equivalent, at the time of writing, of 85p.

The TRYP Tenerife Hotel dominates the skyline of Los Cristianos. You can see the slightly brutalist lines of its sixteen floors from almost anywhere in town — quite useful if all those cheap beers have slightly blurred your recollection of the way back after a night out! Set in its own grounds just a three minute walk from the beach, it becomes apparent from a quick tour that, if you wanted to, you need never leave the hotel for the entire duration of your stay. There are separate pools for adults and children, tennis courts, a gym, mini-golf course and even a full-sized stage with auditorium for more than 300 people to watch the entertainment which is regularly shown there. 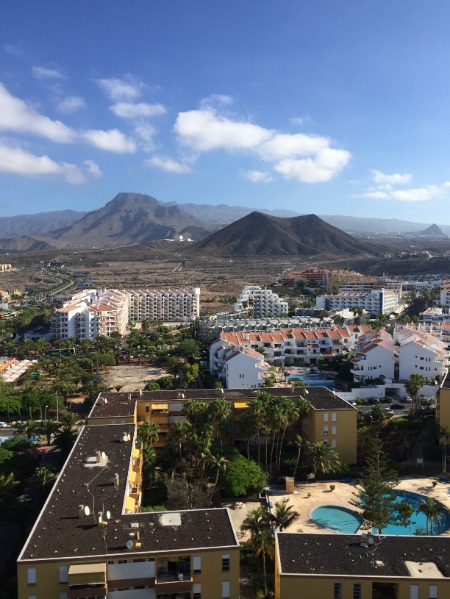 The property has been improved since TRYP by Wyndham took over the running of it last year, when it was previously known as the Sol Princesa Dácil. Nice touches make a good impression on arrival: check-in is done whilst seated at one of three welcoming desks with a glass of something cold and refreshing, rather than stood waiting at an impersonal counter; an extra key-card is given automatically so that one can be left in the room’s control panel, handily keeping the fridge and air-conditioning, or electrical chargers, running even when there’s nobody in the room. The free WiFi works reliably well everywhere; not just in the bedrooms but even outdoors by the pool.

I am given a premium room on the thirteenth floor; an inauspicious number to some but I don’t feel unlucky at all when I open my door, go through to the balcony and check out the view. To my left, Los Cris’s beaches lay stretched out before me baking in the sun, with the faint outline of neighbouring island La Gomera shimmering across the sea. Turning the other way, I see one of Tenerife’s dramatically rugged mountain ranges sweeping down to meet the northeastern outskirts of the town. The accommodation itself is decorated in that clean, simple Spanish style: all bare white walls and simple, unfussy furniture which make the already generously-sized room seem even more spacious. The bathroom is large enough to throw a party in.

The TRYP offers an all-inclusive package but I have opted for just bed and breakfast which, when you consider how cheap it is to drink and eat well in this town, might make more sense (unless you’re bringing children, possibly). For research purposes, I take a wonder anyway around the buffet selection at dinnertime and am pleased to find that, just like at breakfast, there is a satisfyingly wide range of options available. From waist-expanding fried fare that most of the British contingent seemed to tuck into as though they’d never heard of the word ‘cholesterol’, to fresh looking vegetarian and healthy fish dishes, decent Spanish ham, salami and cheeses plus colourful fruit of all varieties. Ingredients are clearly labelled to guide allergy-sufferers and it should be possible to find something to suit most diets quite easily. The breakfast staff, who on my visit all seem very friendly and unnervingly attractive for this time of the morning (even the cleaners look glamorous…do they hire them from a model agency?!) are courteous and attentive but do not, I am relieved to report, suffer from that annoying habit which afflicts some other large hotels where they swipe everything from your table, even the food you haven’t finished, every time you get up to refresh your coffee cup or get more juice.

The following morning, I attend to the serious business of suntanning and so take a wander poolside to find a lounger. Like most holiday resorts, this one is not exempt from the curse of “towel tyrants” who must surely sneak downstairs pre-dawn to claim the choicest spots and mark their territory with garishly coloured textiles; however, there are still enough to go round in spite of this. I manage to avoid being roped into a game of water-polo organised by the hotel’s entertainment staff and settle down to a very pleasant afternoon spent damaging the molecular structure of my skin with the sun’s harmful rays. There is a pool bar serving hot and cold drinks and snacks and, very conveniently, a utility block just a few steps away offering changing rooms, showers and even a launderette. It’s worth knowing that, should you find the noise of frolicking children and their boozing parents, as well as the Euro-pop that is played constantly from loudspeakers by the pools, a bit too much, there is a much quieter, relaxed and far less crowded sun terrace hidden away on the first floor, accessible only from the stairwell.

On my last day, I ask the receptionist about a late check-out (3pm, rather than midday) but am told that, due to a Ricky Martin concert in town that weekend, the hotel is fully booked so it is not possible. She does kindly allow me an extra hour in the room free of charge, though. Judging by the row of mobility scooters parked outside the hotel entrance, Ricky’s fan base has aged somewhat since the heady days of his mammoth worldwide hits. In the car-park, an overzealous septuagenerian in an electric wheelchair races down an access ramp, takes the corner a bit too quickly and topples over, slow-motion cartoon style, his sunburnt head coming gently to rest in the soft earth at the foot of a rose bush. Luckily, he is unhurt but this is clearly a warning for the future against trying to live “la vida loca” in your late seventies after too much cheap sangria.

I shall keep returning to Los Cristianos for my dose of winter sun and I shall almost certainly continue to stay at the TRYP Tenerife. I’ve stayed at other hotels and apartment complexes in town, many of them also very good, but it’s hard to beat the TRYP for it’s excellent location and amenities, the quality and size of its rooms and for that excellent breakfast buffet. Now, if only they could install one of those Euro-per-pint beer dispensers on my balcony.

The Circus of Horrors introduces The Never-Ending Nightmare