Held on March 9-10 at the Islington Business Design Centre in London, the show attracted nearly 12,000 travel-hungry visitors planning their next year of travel.

Comedian Mark Little, aka Joe Mangel from Neighbours, opened the show at 10am on Saturday with hundreds of fans queuing outside the exhibition venue.

The actor then spent more than two hours at the show, chatting to visitors and exhibitors, entertaining them with jokes and banter. 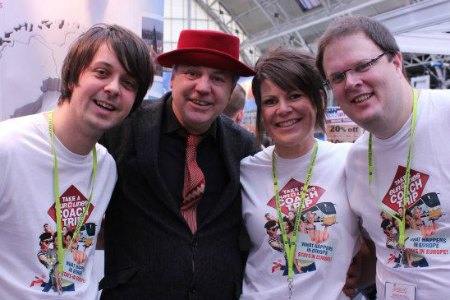 “The TNT Travel Show is a top event, with fantastic people and some bloody amazing travel deals,” he said. “I’ve had a couple of Jumbuck’s pies, a few mojitos at the Elk bar, and I’m having a great time.

“I’m coming back next time to book a couple of trips.”

As well as discounts of up to 50 per cent on holidays in the UK, Europe and worldwide, visitors were also booking group trips, overland routes and off-the-beaten track destinations in Eastern Europe, Africa, America, South America, Asia and Australasia.

Boasting even more exhibitors than last March’s TNT Travel Show, the event showcased everyone from tour operators to hostel and campervan companies – everything visitors need for a full travel itinerary, tailored to every budget. 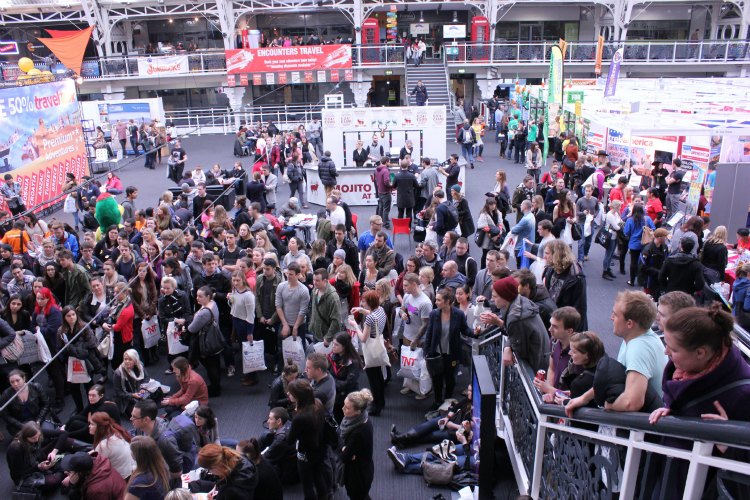 Learning how to survive in the wild with Bear Grylls’s best mate; the essential guide to the Everest Base Camp; sex and solo travel; and the lowdown on the 2013 festival scene were just some of the free seminars on offer.

The full-on first day of the event, which saw nearly 8000 people through the doors, ended with a Harlem Shake finale organised by Travizeo.

Kay Gillespie, of Haggis Adventures, who got stuck into the dancing chaos, said: “It’s been awesome, really hectic. I loved the pies. I loved the people. I loved the Harlem Shake. Overall it’s been incredibly worthwhile and we’re really looking forward to the next show.”

Other exhibitors also reported taking fantastic bookings over the weekend.

Paddywagon’s Gabriel Finn said: “The show has been fantastic. The layout of the venue is brilliant, the organisation of the show second-to-none and yet again TNT has surpassed its level of commitment to all its readers and customers.”

Ben Parker of Fanatics said: “It’s been amazing. It’s been buzzing over the two days and we’ve had a bumper turnout.”

The TNT Travel Show – a twice annual event with the date for our October show soon to be announced – draws 18-35-year-old travellers keen to explore the UK, Europe and beyond. 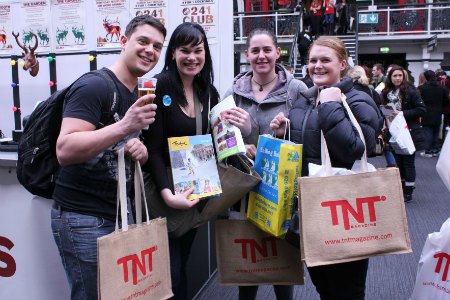 Carol Driver, group editor at TNT Multimedia, said: “TNT would like to say a huge thank you to all our exhibitors who once again went all-out to help produce an unrivalled event.

“And we extend that gratitude to our readers, who turned out in their droves ready to take advantage of exclusive, on-the-day deals they know they won’t get anywhere else.

“We’re also pleased with the response we’ve had to our TNT UKBA Balls-Up campaign, aiming to take the government office to task over its shambolic visa services, with more than 800 signatures taken over the weekend and lots of horror stories. To find out more see tntmagazine.com/ukba.”