Holmes explained in icing on the cake that “having recently become a father I now realise how precious life is and how important it is to spend my time doing something that makes me, and other people, happy.”

“For that reason I hereby give notice of my resignation, in order that I may devote my time and energy to my family, and to my cake business which has grown steadily over the past few years.” 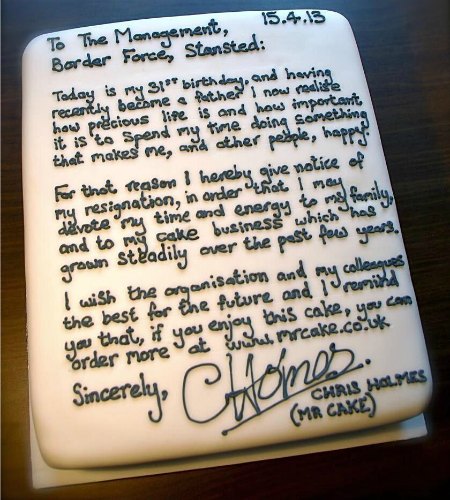 Holmes, whose businesses’ name is Mr Cake, plans to follow his sweet resignation with a career in cake baking having previously worked as a pastry chef at Midsummer House in Cambridge, a Michelin starred restaurant.

Mr Cake’s brother in law Stewart Jackson decided to share a photo of the cake resignation on Twitter. The cake ‘letter’ has since been shared extensively.

Whitney ‘was out of control’ at nightclub says X Factor star