It is estimated around 700,000 Syrians have fled to Lebanon, over 500,000 in Jordan and 460,000 in Turkey. Egypt and Iraq are also receiving thousands Syrian people on the run from violence in thier towns and cities.

The UN Refugee Agency (UNHCR) said in a statement: “The war is now well into its third year and Syria is haemorrhaging women, children and men who cross borders often with little more than the clothes on their backs,

“This trend is nothing less than alarming, representing a jump of almost 1.8 million people in 12 months.”

There are an average of 5,000 Syrians fleeing to neighbouring countries every day, according to UNHCR – with 52 per cent of these made up of children under the age of 17. One-third of the population of the country is reported to have now been displaced.

António Guterres, the United Nations High Commissioner for Refugees said the situation in Syria was “a disgraceful humanitarian calamity with suffering and displacement unparalleled in recent history.” 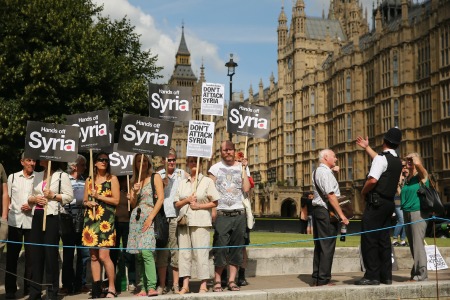 “America has a responsibility to launch strikes to prevent the killing by Assad. Obama has a Nobel Prize but he does not deserve it because he has not responded to so many deaths,” said 22-year-old refugee Mohammad Dallah, living in Jordan’s Za’Atari camp, in an interview with The Telegraph.

“We know only 25% of Americans back the strike. We know that in Europe people are also split.” Mohamed Mahdi, another Za’Atari camp resident told The Guardian.

“But this is the third year of the war for us. America and the Europeans are not standing with the Syrian people. It feels as if nobody cares about what is happening to us.”

Main image: Syrian refugees demonstrate against the Assad regime at the Za’Atari camp in JOrdan in January this year (Getty)

TODAY there are 2 million Syrian refugees:
-increase from 230,671 a year ago
-1/2 are children
-“great tragedy of this century” -HC Guterres