Around 5000 riders took part in the protest that was organised by the London Cycling Campaign.

They converged on the South Bank before the three-mile long cycle parade proceeded to Parliament Square where the Get Britain Cycling report was being debated in Westminster.

The cyclists had horns and stereos and some even rode vintage bikes such as the large-wheeled penny farthing.

“We’re here to show we are a force to be reckoned with,” London Assembly member Jenny Jones told The Evening Standard.

“We hear a lot about the money being spent but it’s not enough and it’s in too few places. We want more money and we want it now.”

The protest is to improve cycling conditions on the city’s streets, a chief change wanted being separating cyclists and motorists at major junctions.

Last year 14 cyclists were killed on London’s roads and six have died in London this year, the most recent being 67-year old Dr Clive Richards, who died after a collision with an HGV in north London last month. 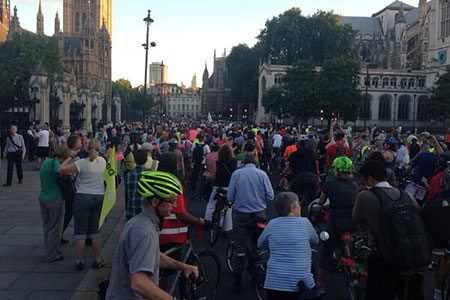