You have to watch where you’re walking in Wroclaw. On my first day in the south-western Polish city I almost go flying as, my face buried in a map, I fail to notice a diminutive statue of a dwarf set into the pavement. My little bronze friend, I later discover, is just one of around 150 in the city, placed to commemorate the work of the Orange Alliance, a protest group that dressed as dwarves as a way of ridiculing the police and government. What might appear at first glance as examples of cutesy street art are actually proud symbols of Wroclaw’s place at the forefront of Poland’s pro-democracy movement in the 1980s.

Having put away my map, with eyes carefully scanning the road in front of me, my visit begins properly at Wroclaw’s Rynek, or main square. It has the feel of Brussels or Vienna, but without the tacky tourist cafes, souvenir shops and people getting in the way of your photos. Wroclaw (pronounced ‘Vrots-waf’) is Poland’s fourth largest city, boasts 40 festivals annually, and offers food and accommodation at a fraction of the cost of most top European destinations, yet barely registers on people’s city break radars. 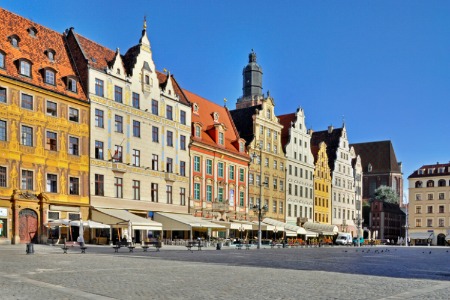 As I gaze up at the extravagant façade of Wroclaw’s 14th-century City Hall, I’m amazed it managed to survive the terrible bombing that wreaked such havoc during the Second World War. It is now the city’s main meeting point and buzzes with activity day and night. Overlooking the square is another survivor, the grand and imposing St Elisabeth’s Church, which also dates back to the 14th century. I drag myself up the 300 steep steps to reach the observation deck at the top of the church’s 91m spire, and gaze out over the city, gasping for breath. About 60 per cent of Wroclaw was destroyed during the war, but, unlike in so many former Soviet cities, rebuilding was done sympathetically, meaning that the city is full of historical character and a great place to lose yourself wandering around for a couple of days. 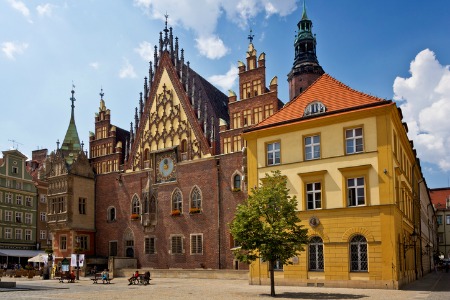 A short walk from the Rynek, through Wroclaw’s compact and buzzing university district – home to the beautiful Aula Leopoldina, an elaborately decorated Baroque lecture hall in the main university building – brings me to the River Odor and its cluster of petite islands. I’m kept occupied for a whole afternoon exploring the chilled-out green spaces and lovely medieval churches, including the city’s impressive cathedral, and reading the inscriptions on the hundreds of padlocks left by lovers on Tumski – aka Love – Bridge. The evening offers a cultural excursion usually off limits in London because of its expensive price tag: the opera. For less than the price of the cinema at home (tickets start at 21 Zloty or about £4), I find myself in the luxurious surroundings of the 19th-century opera house, watching an obscure work called King Roger. It’s entirely in Polish, so I don’t understand a word, but the music is beautiful and it’s a great opportunity to get dressed up and experience the classier side of life in Wroclaw.

The city’s pride and joy is the Raclawice Panorama, a massive circular painting of an 18th-century battle. When I confess to the hotel concierge that this doesn’t really sound like my thing, she gasps, genuinely offended that I might be about to miss out on the city’s chief attraction. Encouraged by her enthusiasm, I give it a go. As I walk around the bunker that houses the painting, taking in the huge display and its bizarrely realistic 3D detailing, a booming commentary narrates the story of the battle and the painting itself. The Panorama is an art gallery and history lesson in one, and definitely worth making time for.

My final night in the city is dedicated to bar-hopping, taking in a late-night live funk jam at Schody Donikąd on Plac Solny; sampling the many beers on offer at Spiz, the bar and micro-brewery beneath City Hall; and gorging myself on snacks at the one after another of the bars in the railway arches on Wojciecha Boguslawskiego Street. Tourists are still pretty rare here, meaning we attract friendly interest from the locals, who are quick with their smiles and chat.

Budget: Kuchnia Marché is a great-value buffet restaurant with a wide
range of international options (marche.com.pl).

Luxury: Bernard is the perfect spot to watch the world go by on the Rynek, while munching on beautifully fresh Polish and international dishes (bernard.wroclaw.pl).

Budget: There’s a rowdy atmosphere at Spiz, an ancient bar at a fantastic micro-brewery located beneath City Hall (spiz.pl).

Midrange: Mleczyrnia is the hippest, yet least pretentious bar in town. Popular with students, it was the first place to open up on what is now a fantastic street for nightlife (mle.pl).

Luxury: With live music until late most nights, a tempting cocktail menu and a decadent vibe, Schody Donikad is the best of Plac Solny’s many bars (schodydonikad.pl).

Budget: The Moon Hostel is a cosy hostel, situated within walking distance of the Old Town. Dorm beds from 30PLN (£6pppn) (moonhostel.pl/en/wroclaw).

Midrange: If you like the sound of Mleczyrnia, then why not stay at the bar’s sister establishment, the super-friendly Mleczarnia Hostel. Dorm beds from 35PLN £7pppn (mleczarniahostel.pl).

Luxury: With no reception desk, the emphasis is on self-service at the sleek Puro Hotel and all the rooms at this hotel have the latest technological gadgets. Double rooms from 379PLN £75pn (purohotel.pl).