The Veronicas’ latest People for the Ethical Treatment of Animals (PETA) advert has been banned in Australia after its graphic depiction of half-skinned rabbits was deemed too shocking.

Twin sisters Jess and Lisa Origliasso flew in to Sydney this week to unveil their hard-hitting poster, which features the pair holding up skinned rabbits with the slogan: “Here’s the rest of your fur coat.” However it has since been banned.

Jess told Australia’s The Daily Telegraph, “Death for these animals is a horror story. I admire the approach to the eye-catching photo shoots PETA do to get the important message out there”.

A statement from PETA said: “In China – the world’s leading fur exporter – animals on fur farms are commonly skinned alive. Millions of dogs and cats are killed in China for the international fur trade.

“Fur from China is often processed and relabelled in other countries, making it impossible to tell where – or who – the fur came from. On fur farms elsewhere, animals spend their lives pacing in cramped wire cages before they are poisoned, electrocuted, gassed or beaten to death.” 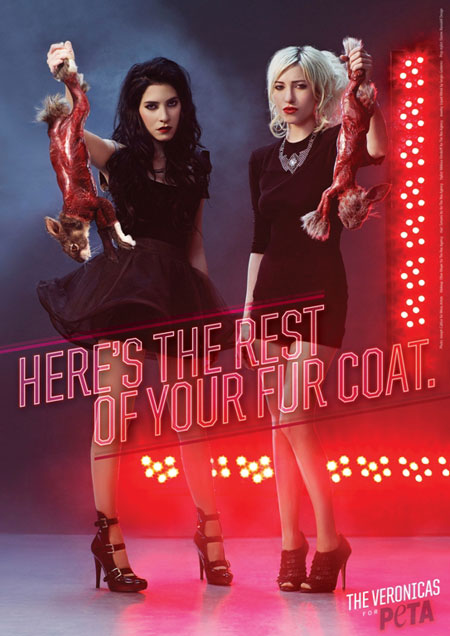 Get more info at: PETA.org.uk

Opinion: Brits are happier and more satisfied than Aussies according to new survey