But he did reveal that his group had been in touch with opponents of Syrian President Bashar Assad.

He said that Hezbollah had “contacted elements of the opposition, to encourage them, to facilitate dialogue with the regime.”

Speaking through a translator, Nasrallah claimed that Hezbollah had been rebuffed.

“You have an opposition that is not prepared for dialogue … all it wants is to bring down the regime,” he said.

Tuesday marks the launch of Assange’s unlikely career in television, and a partnership with a state-backed station that many have found uncomfortable. 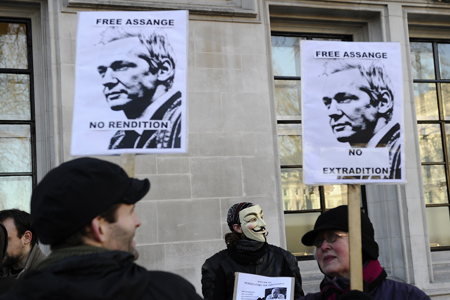 Assange himself said he anticipated criticism along the lines of: “There’s Julian Assange, enemy combatant, traitor, getting into bed with the Kremlin and interviewing terrible radicals from around the world.”

But the Australian said that RT had a big audience and his guests had told him things they “could not say on a mainstream TV network.”

Assange remains under strict bail conditions at an undisclosed location in England while he fights extradition to Sweden on sex crime allegations.

The interview with Nasrallah was carried out via videolink and with the help of translators.

Shutting the stable door after horsemeat burger has bolted? Waitrose pulls Dalepak burgers ‘as a precaution’