54-year-old Talhat, who is reportedly mentally ill, held one large knife to his throat and another to his chest Rehman lunged aggressively at a police officer who was attempting to intervene.

Police resorted to discharging an electric shock from a Taser to disarm the man and take him down.

A spokesman for Scotland Yard said “He was not making threats to members of the public but he was challenged by police. He acted aggressively and a Taser was discharged.” 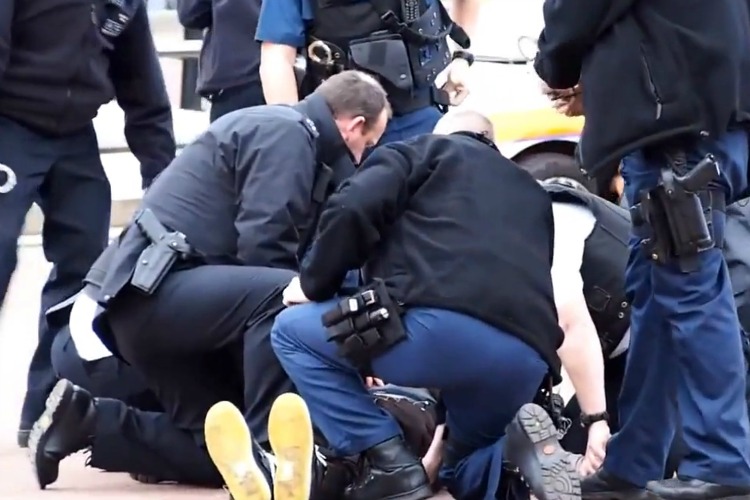 Talhat, who lives in Harrow in north London and who reportedly has a history of mental illness, will appear in court today charged with affray and two counts of possessing a bladed weapon.

The incident occurred at midday on Sunday and was watched by hundreds of tourists gathered at the Palace gates, listening to ceremonial music played by the Band of the Grenadier Guards. Around 15 police officers are thought to have been involved in the swift operation.

Eyewitness Josh Greenburg told The Daily Telegraph “One [policeman] stood in front of him and the other went around from behind and discharged the Taser then the police got him on the floor, kicked the knives away and put him in the back of a van.

Another eyewitness, Kevin Burrows, told The Daily Mail, “The police were fantastic; it was all over in minutes. The procession was diverted away from him and the band just kept playing.”

Another photo from #Buckingham palace moments ago – Male with a #knife to his neck #Tasered by #Police twitter.com/JGreenbergRUS/…

How to Find Long Lost Friends

Casino account takeover: the billion-dollar crisis that’s not being talked about