View from above: We take in the sights of New Zealand’s Mt Cook

The glacier-fed water is a calm turquoise, reflecting the morning glow, the mountain peaks in the distance are jagged and capped with snow. I step outside the hostel, exhale my morning breath, made up of last night’s beer and local pizza. I can almost see the stale breath becoming brittle in the biting morning breeze, crashing to the crispy dewy grass and disintegrating.

Lake Tekapo is in the southern-most reaches of the Canterbury region on New Zealand’s South Island. It’s a quaint town that in the winter has brilliant skiing, heli-skiing and boarding. In the warmer months there’s plenty of activities, from fishing, hiking, mountain biking, mountaineering, and golfing, to why I’m here – for nearby Mt Cook, the largest peak in New Zealand.

You can see why director Peter Jackson always imagined his country to be Middle Earth, as the near-perfect farmland and rolling green hills break out into high rocky country for those hairy-footed dwarfs, or Ewoks, or whatever they were, to climb over.

Minor details aside, those munchkins were chumps to do all that walking – no retracing for me, I’m flying to the top.

At 3,754m tall, Aoraki/Mt Cook does not reach the dizzy heights of Mt Everest (8,848m) but for its height, it’s considered very technical to mount and conquer, kinda like Natalie Portman – and even harder to get to the bottom. (Ed: Oh no you didn’t!). 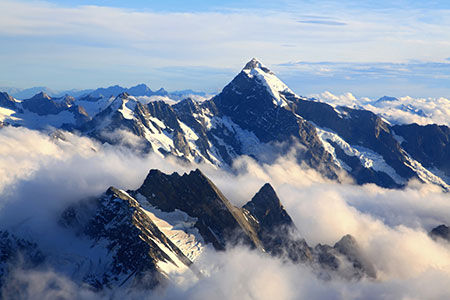 To keep up with the allegory, she’s equally stunning to look at. And as someone who struggles to get out of bed – especially if Nat is involved (Ed: okay that’s enough) – let alone climb a mountain, the option of flying by Mt Cook and a snow landing on the Tasman Glacier sounded much easier.

We take-off and bump slowly upwards before turning towards the great Aoraki – which means Cloud Piercer in Kai Tahu, a Maori dialect.

The day is beautiful, all blue skies, not a cloud to pierce. We sail over broken glacier entrails that lead into the smooth white frozen river, with crevasses looking ominously deep.

Who knows what type of woolly mammoths or sabre-toothed creatures you may fly by on your descent if you were to fall down one of them.

The cliff faces below are jagged and fierce. Our pilot cranks a handle and the crunch of metal and sprockets remind me again this is not the big Boeing I flew to NZ in. 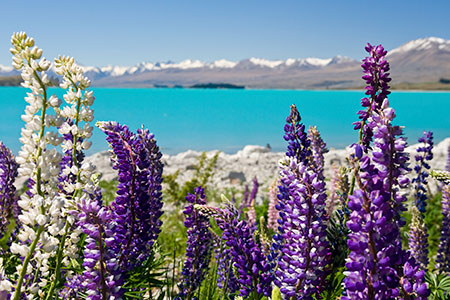 He’s lowered the skis over the wheels for us to slide up the glacier on. We get lower and lower to the blinding white surface below until the peaks engulf us and we glide smoothly onto the flat snowy strip that is the top of the glacier. The landing is smoother than anything Eddy the Eagle ever did.

I imagined it to be more like the Uruguayan rugby player’s landing in Alive, skidding out of control. The Snickers in my pocket reassures me I’m not eating the pilot for at least an hour.

As we pull in to stop, the motor shuts down and we step out into the crusty snow. Immediately one of our crew slips over on his arse. It’s hilarious, until my laughter begins to keel me over. I right myself and shut the hell up.

The pilot asks if we can hear ‘that’? We stop moving so not even our feet are crackling and there’s nothing to be heard. I look at him, eyebrow raised. But then he smiles. It’s serene silence.

I’m scared of that time alone inside my brain, silence, peace. The clicking of a camera should be enough, so I start snapping shots, but it doesn’t do the place justice.

Imagine being the last fruit loop in a giant’s breakfast bowl, just you and the white milk far below the 360 degree slippery walls of the bowl. I didn’t imagine it at the time, it’s just a stupid analogy a lazy and hungry writer that hasn’t had breakfast yet might use.

After about 20 minutes of taking it all in, filling our lungs and our memory sticks, we board the plane and take off down the glacier on our skis.

This time around we fly close to peek at the peak of Mt Cook. We do our best Top Gun impersonation and buzz the tower and it feels like we can reach out and grab the peak but as we get closer a climbing hut puts our distance into perspective. We’re still quite a way away – it’s just that big.

We land safe and sound on the airstrip. Looking up to the high peak, a large cloudbank rolls over the face like a landslide, tempting fate, just waiting to be pierced by the jagged edges.

The airport terminal is full of the company’s unique history and is well worth a stroll around. After a tea and a chat I hop back into my campervan and head to Christchurch. I wonder if anything’s going to get me up to those heights again. If only Natalie had been here to enjoy it with me.

Scouting for Girls on where they hang in London, the X Factor and their fans