Hiking Franz Josef Glacier in NZ: We venture to one of the world’s most accessible glaciers

The cave glows with delicate shades of topaz blue, like an idyllic tropical beach except here the water is distinctly cooler. “We’ve just found it today, but in a day or two it’ll be gone again”. Up here, cracks and arches appear and melt away daily. That such exquisite beauty is so transient seems quite tragic, but it’s exactly what gives ice so much appeal.

One of just three glaciers worldwide to extend down to levels where the average traveller can tramp all over them, Franz Josef offers us a glimpse of what is usually only the realm of mountaineers. Maori legend tells of how two young lovers were walking in the peaks when the boy lost his footing and fell, leaving her crying endlessly for her lost love. The Maori god froze her tears, creating the glacier which is now known as “the tears of the avalanche girl”.

Reaching the front end of her ‘tears’, our large group of glacier trampers is split into five groups depending on our preference for step size. The nimble amongst us who can ascend on little more than a nick in the ice go into group one. Those with oversized hobbit feet, needing shelves of ice to clamber up, go into group five. Everyone else drops in between, forming handy-sized parties of just 11. 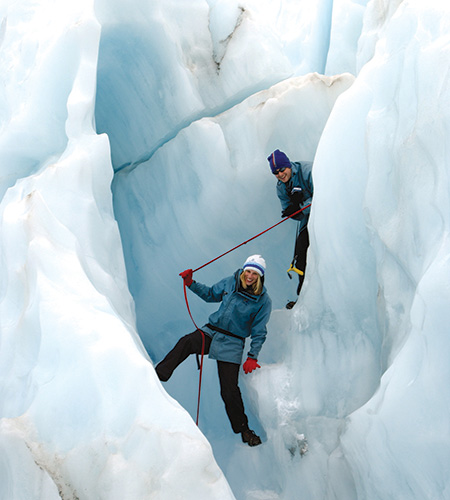 Strapping on crampons, we stomp our way up the mush of ice and gravel via steps chopped into the ice by whoever drew the short straw that morning. The staircase literally melts away every day and some poor sod has to come out at 7am to re-cut it. A full day on the ice gets us far up into the incredible land of caves, pinnacles and crevasses. The giant icy tongue cracks as it slides over uneven rock hundreds of metres below and splits into the most dramatic shapes – towering waves frozen in mid-curl, deep scars down which only the fearless can peer.

We follow Trevor diligently through tracks of ice cubes left by the crushing footsteps of the advance party, aptly called crunchies. He screws in hand-lines if we have to go up and teaches us the ‘Franz shuffle’ to go down – simply turning sideways to step down with a stylish shimmy. I wonder if there’s any angle these crampons can’t traverse. Someone foolishly puts my thought to the test, walking straight up a vertical wall, but gravity eventually wins out and drops him back down in a heap nursing two bloody knees. 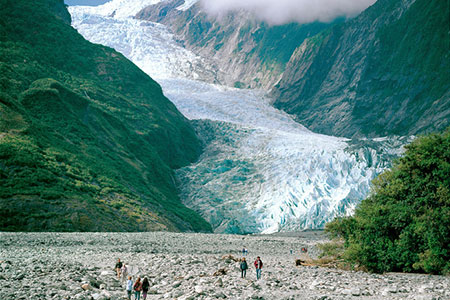 The guides carefully pick out routes through the ice field to avoid hazards, and with the scenery changing daily, no one trek is the same. Trevor seems just as thrilled as us when fellow guide, Shaun, finds the ice cave. We’re shown bubbles trapped in the ice – a permanent record of winters gone-by when snow piled thickly on the mountains above.

It’s the weight of so much snow that gives the ice its characteristic hue. With all the air pushed out, the ice reflects only blue. But don’t go expecting to be dazzled – Franz’s front-end is filthy on account of all the rock it pushes down the hillside, “a bit like a bulldozer” Trevor explains.

With milky-white water gushing from the lower slopes of the glacier, you’d be forgiven for thinking that Franz is disappearing like all the other big chunks of ice around the world. But it’s actually growing – creaking and groaning its way down the valley at about 20cm a day. It’s now a mile closer to the village than it was back in the ’80s. It’s still a long walk though and eventually the cold and gradient take their toll.

“If you’re feeling really lazy you can just sit here and in a year you’ll be back where you started,” Trevor says. He relates the story of a plane that crashed high up on the glacier, only to reappear in bits seven years later out the front end. I’ll take the walk down, thanks. As we hit the valley floor, I overhear someone say the trek has been “definitely the coolest thing I’ve ever done”, with no hint of irony. 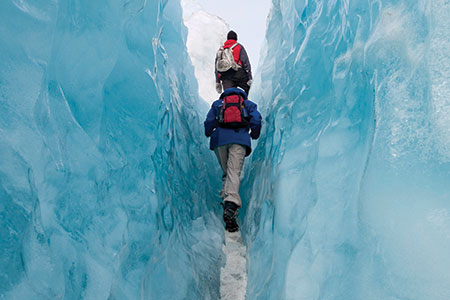 And it’s an adventure never to be repeated. Just as you never step into the same river twice, every walk on the shifting ice is unique, which probably makes this tramp as ‘franztastic’ as the guides make out.

Fox Glacier is just 25km down the road from Franz Josef, and despite lacking the dramatic gradient of Franz, it offers arguably better views for free. The walks to and around the glacier offer picture-postcard scenes, none more so than the mirror-like Lake Matheson.

Catch a reflection of Mounts Tasman and Cook in the tea-stained waters – but get there early to avoid getting stuck behind plump, waddling tourists spilling out from the numerous tour buses. Less easy to avoid, and more likely to put you into the same category, are the cakes at the cafe with views across the fields to the Southern Alps. You’re not allowed to walk right to the face of Fox Glacier, but the flimsy rope fence deters few.

Better views of Fox in all its glory can be found at the end of the Chalet Lookout trail, reached by crossing the river swing-bridge and strolling up through steep rainforest. The short Moraines Walk zigzags over gravel mounds left behind by the glacier in 1600 and 1750 AD, now cloaked by damp, moss-encrusted beech trees, giving a ‘Lothlorian’ feel to the forest.

Cool and Creative Stuff Every Writer Should Buy Online for Inspiration