Okay, it may resemble a small Scottish country town, but there’s a lot going on in Wellington. I liked ‘Welly’ so much I stopped off there for a bit, and ended up staying six months.

At the windy southernmost tip of North Island, politicians jostle for microphone space with vegan protesters and bearded guitarists; mountains and seawater jostle with glass and steel, a ridiculous number of theatres and galleries jostle with cocktail bars… even the old tectonic plates do a fair bit of jostling, deep beneath the earth.

Sandwiched between lonely, windswept mountains and a sparkling harbour, and right on top of a major earthquake fault line, Wellington offers the best of all three worlds. Water-wise, if you can take the chilly waters, there’s some awesome kayaking, sailing and windsurfing to be had.

The mountains are criss-crossed with trails for walking, horse riding and trail biking. And the big crack – sorry, fault line – makes it all very exciting and unpredictable. Several times a year, Wellington gets a quake, around a 5.5 I’m told – just big and loud enough to get the adrenalin going, but not enough to actually hurt anyone.

I haven’t yet felt a tremor, but I live in hope. Gives a whole new meaning to: “Did the earth move for you too, honey…?” If you miss out on the ground shaking, there’s always the wind. During Wellington’s perkier moments, you can walk along the street at a 45-degree angle with your cheeks billowing and a loud whistling in your ears. It’s a kind of ground-based skydiving. 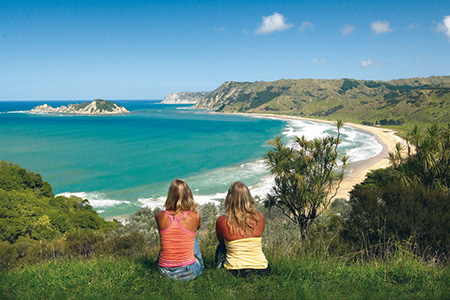 Most of the action is within two blocks of the waterfront. A good way to get your bearings is to walk along the waterfront between the railway station and Oriental Bay for about half an hour, then back through the shopping precincts.

You’ll pass the waterfront wharfs and ferry terminal and the famous national museum of Te Papa, meaning ‘our place’. This enormous, ultra-modern complex has free admission and tells the story of all things Kiwi, from the Treaty of Waitangi to the making of The Lord of the Rings.

Oriental Bay is a sheltered cove with a very posh seaside suburb, nestled beneath the slopes of Mount Victoria. Truckloads of golden sand are deposited on the beach regularly, making it a picturesque spot.

If you need any more help to get your bearings, I’d recommend ascending to the Botanic Gardens. Look out for a little alleyway running off the busy sidewalks of Lambton Quay. You will find a cute little red train waiting at a quaint and well-concealed station.

When the fat controller rings his bell, the famed Wellington Cable Car will begin a death-defying ascent until it emerges into a panoramic vista. At the summit the city is spread out at your feet.

When you tire of the view, take a ramble through the Botanic Gardens, which range from wild, rainforested ravines to orderly rose gardens and mossy beech groves. I’d recommend the cactus garden for a quick sit-down.

The Carter Observatory houses an enormous telescope to help you do a quick sightseeing tour of outer space. During your hilltop pontifications, you will have spotted that Wellington is more or less ringed by unspoilt greenery. Aside from the lookouts there’s plenty of forested countryside to keep you occupied. 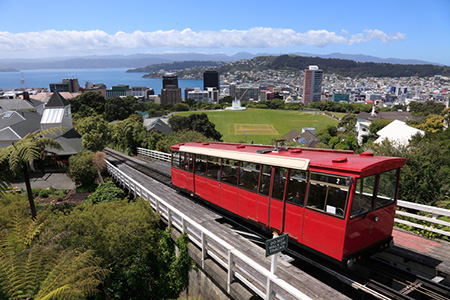 If it’s 100 per cent Pure New Zealand (as advertised) that you want, you don’t have to go far. The Karori Wildlife Sanctuary is only a couple of minutes from the city centre. It’s like an onshore island, where birds live and die completely unaware that they are being protected.

New Zealand is a land of birds, and most of them are endangered. This is pretty much the only place in the country where you can wander among wild native birds. Special night tours take you kiwi-spotting, but by day you can look out for NZ’s best-loved birdies, from the tuneful tui to the raucous kaka.

The city wilderness doesn’t end at Karori. Just 10 minutes from the centre is another world, the wildest yet. The steep cleft through the mountain is full of tree ferns and wild ponies. There’s a desolate surf-pounded coastline – all scree, gritty black volcanic sand and sharp, jagged rocks.

It didn’t exactly make me want to stretch out on the sand, but the seals seem to fancy it. Here they lounge around on the rocks like it’s Christmas on Bondi.

I tried to convince one chocolate-brown individual to slide into the harbour – there weren’t any waves and I’d offered to sweeten the deal with a heap of pies, but all I got for my troubles were a pair of yellow fangs and a jet of extreme halitosis. Charming.

Standing out there amid rock, wind, sea and the fury of nature, it didn’t seem possible that cosy cocktail bars were just around the corner. But 10 minutes later I was gratefully warming my cockles with a gaspingly gorgeous, dark-chocolate martini.

Cocktail bars surrounded by seal colonies and wild kiwis… genteel theatre audiences surrounded by crazy winds… a beach that’s remade by a lorry every night. Nothing that Wellington could throw at me could surprise me now.

Except, perhaps, that just-the-right-size earthquake. I’m still waiting. Quick, everyone jump up and down at once…