Wikileaks’ Julian Assange has been granted bail for £240,000 after being given an address to reside at in the UK.

Assange appeared in court today accused of sex crimes by two Swedish women, allegations which he denies. Sweden is currently calling for the Wikileaks boss to be extradited.

The 39-year-old’s second bail application, at the City of Westminster Magistrates’ Court, was successful. His earlier request for bail was turned down, despite the backing of film director Ken Loach, Jemima Khan and journalist John Pilger, who had all offered sureties.

Assange’s bail application was granted today in part because he has been offered a UK address considered by the court to be secure.

Former army captain Vaughn Smith, who runs the independent journalist’s Frontline Club, has offered his home as a bail address as well as a financial surety.

Crowds of protestors stood outside the court today protesting Assange’s innocence. Many wore masks with the Wikileaks leader’s face and placards read: “Sweden, puppets of the US” and “Exposing war crimes is not a crime”. 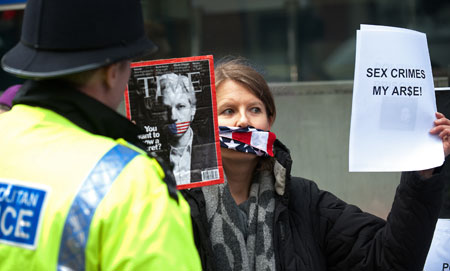 Since his arrest last week, it has emerged that Assange’s cell was monitored by CCTV over fears that the controversial Wikileaks boss might be assassinated.

Assange’s British lawyer Mark Stephens claims that a secret US grand jury has already been set up to develop charges against Assange.

The Wikileaks figurehead spoke out this morning, through his mother Christine Assange, telling the world that he would continue publishing documents.

“My convictions are unfaltering. I remain true to the ideals I have always expressed.

“These circumstances shall not shake them. If anything, this process has increased my determination that they are true and correct,” said Assange.