After all, it was way back in 1990 that the boys from Bury first got together to form a band, and it wasn’t until 2001 that they released their first studio album of five, Asleep In The Back. However, despite the introspective resonance of frontman Guy Garvey’s lyrics making them the darlings of the music press, Elbow were never quite deemed to have cracked the wider public consciousness.

They were instead regularly, and lazily, labelled the industry’s best-kept secret. Lazily, because they were far from secret, thanks to their first three albums making the UK top 20. Either way, that all changed in 2008.

That was the year fourth album The Seldom Seen Kid was released, a record that launched Elbow into the stratosphere. It won them the Mercury Prize before they were named best band at the Brits the following year, while a succession of other gongs served to keep their mantelpiece crowded. 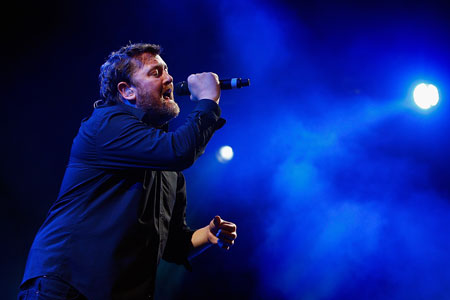 The group are now undeniably one of Britain’s biggest acts, and their 2012 effort Build A Rocket Boys!, featuring songs such as Lippy Kid and Neat Little Rows led to another best band nomination at February’s Brits.

The immensely down-to-earth musicians, however, are taking it all in their stride, as guitarist Mark Potter explains. “Our lives haven’t really changed at all,” he says. “Yes, we’re a little bit more comfortable now, and Guy is quite famous, getting recognised probably anywhere in the UK, but what it’s done for us more than anything is allowed us to do exactly what we want to musically now.”

On their recent rise, Potter adds: “It’s accelerated over the last few years, but we were never unhappy. With the first few records, we were still making a living out of music. We weren’t a household name or playing arenas but we didn’t have to hold down other jobs to do what we loved.

“Really, the success since Seldom Seen Kid, we hadn’t done anything different, it just connected. It’s very odd. What the five of us do in a little studio in Salford, and the places it takes us, well, we feel very privileged.” 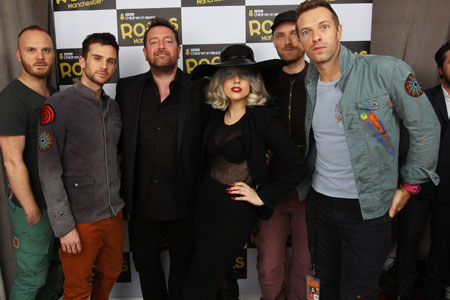 I, for one, am relieved to discover Elbow’s famously easy-going nature is not the stuff of legend. After a mix-up with times finds me taking the call several drinks into a visit to the pub, Potter shrugs off the 10-minute delay with a joke, before explaining that “we’ve never really bought into the celebrity thing”.

He adds: “Like with the Brits, it’s lovely to be nominated, but none of us are into the glitz side of it. We’ll turn up, but it’s more a chance to give a little back to our wives, buy them a new frock and get them on the red carpet.

“They’re normally left at home with the kids, so it’s for them to experience a bit of glamour.”

More importantly, the band are enjoying being back in the studio, working on both their latest album, which promises to “open a new chapter”, and the official BBC music for this year’s London Olympics.

Apparently, the BBC called Elbow for a “secret” meeting before revealing what they wanted them to do. The song, called First Steps, will be used across their Games coverage.

“Writing the Olympics music was an amazing experience, as well as a real honour and challenge, that just made us want to get writing again,” Potter says. “It was a different thing. We had a brief and a lot of meetings, like you needed a sort of winning moment, crossing the finish line, and a sort of sad moment, but creatively it was very much in our court.

“It’s quick soundscapey stuff. It was a joy to do as we’ve always wanted to do soundtracks. I think our music lends itself to that kind of thing.” 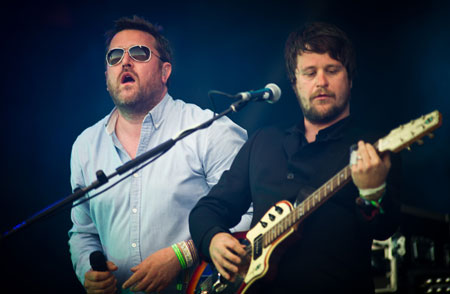 The band are currently gearing up for their five-date tour in Australia, before heading to New Zealand for two nights in Auckland. It’s a short tour but Potter says the crowds will make the journey worth it.

“It’s a long way, but every time we come, we step up, with slightly bigger venues,” he adds. “What’s great about playing in Australia is people really appreciate the distances British bands travel to come to play over there.

“Although it’s a pretty tight schedule. I wanted a day off to go fishing with a mate, but it doesn’t look like my tour manager will let me. So I might end up doing a bit of night fishing in the harbour one evening after a show.”

But for Elbow, it isn’t just about the sell-out tours and huge crowds. In fact, it wasn’t until last year that they did their first UK arena tour, and Potter admits it was a challenge for them to connect with the audience in a big venue.

“We wanted to make it feel intimate, to not physically shrink the venues, but deliver the same sort of show that we’d deliver to 1500 people to 15,000,” he says.

“Although one side of what we do upbeat and anthemic, it was important for us to get across the more romantic, minimal stripped-back stuff, and in the arenas it worked really well. It seemed to draw people in.”

Bizarrely, Elbow are also enjoying success in a very different field right now, as a Build A Rocket Boys! beer is taking Manchester pubs by storm. “Ha, yeah, somebody seemed to think we like drinking,” Potter says. “We were invited to look around local Stockport brewery Robinsons. 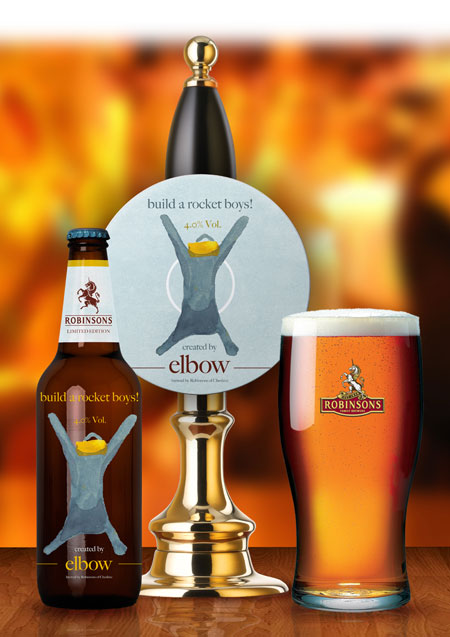 “It turned into quite a drunken afternoon and by the end of it we’d agreed to launch a beer. Initially it was going to be a limited-edition release, but it’s selling really well in a lot of Manchester bars and a lot of supermarkets.”