Tell us what The One Day of the Year is all about?  And how your character fits in?
The One Day of the Year is a ‘coming of age’ play set in Australia in the late 50s. We see a young man grow up and we also see a country grow up. All this is centred around the one day of the year in Australia called ANZAC Day, the day Australians commemorate their war dead. Specifically the ANZAC’s that died at Gallipoli in Turkey during WW1. The play is a clash between old Australia and new Australia. I play Alf Cook who represents old Australia pitted against his son Hughie Cook who represents new Australia. It’s a play heavy with symbols and questions placed in a familiar setting of family drama. It is an Australian classic and was banned when it was first released.

The One Day of the Year was written in 1958 is widely considered an iconic Australian play.  Does it maintain its relevance today?
What the play says about war, grief, loss, waste and the futility of war always remains relevant. Australia is still struggling with its identity, with its ancient past and its multi-cultural present. Questions of bigotry and xenophobia are still relevant to modern Australia unfortunately.

How are rehearsals going?
Rehearsals are going extremely well. It is a monster of a play and the workload for me is immense. My character is a classic Aussie whinger who will not shut up. We are performing the play at The Finborough Theatre in a theatrical style known as ‘traverse’ with audience on two sides of the action. This is my first time working with the esteemed director from Australia Wayne Harrison and his ideas for this play, in this most intimate of spaces, are fantastic. We both have a very similar theatrical love of comedy and tragedy working hopelessly together. This play has all of that. The cast is terrific and I am proud to play one of the great characters of Australian literature. 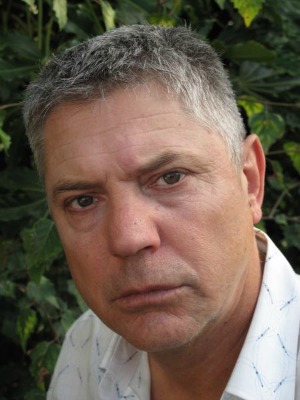 What do you think about the state of London theatre at the moment, particularly ‘fringe’ theatre?
It seems very healthy. London has many fringe theatre venues and what’s presented is diverse, intimate, exciting, innovative and affordable. Go see it.

Many people will know you for playing Joe Mangel in Neighbours – would you ever consider going back to the show?No.

As well as acting, you have written and directed work.  Do you prefer one of these in particular?
I do love performing and the more fringe theatre I see the more I want to direct. I have written and directed many of my own shows and this is also extremely satisfying. As a performance artist in the big city, one has to be prepared to jump any way. I seem to still have the energy for this eventuality. Being offered the role of Alf in The One Day of the Year is truly fantastic. It is a classic role and will take all my talents as an actor to get right. It is my first love and this play lets me hone my skills. I love my self-devised work. I’ve been doing it for decades. At the moment it’s on hold as I’m enjoying working on other people’s material for a change.

What is next for you after The One Day of the Year?
I’m a regular panelist on The Wright Stuff so I’ll be back there before too long. My son Jasper Valentine is directing me in a short film which we keep putting off due to my schedule. I’m touring my latest show #SECRETMEETINGS in the autumn and it looks like I’ll be heading to Edinburgh Fringe for a guest appearance, headlining a show up there. I’ve been writing a blog for the Huffington Post and look forward to finding the time to write for them again. Then there’s panto at Christmas.

The One Day of the Year will run from May 19 to June 13 at the at the Finborough Theatre in Earl’s Court. For more information, please see: http://www.finboroughtheatre.co.uk/productions/2015/the-one-day-of-the-year.php