Ciudad de las Artes y las Ciencias (The City of Arts and Sciences) is an architectural marvel, built on land reclaimed by the re-routing of the River Turia. Stroll among the giant shell-shaped buildings including Oceanographic Park, Europe’s largest aquarium.

Take a stroll down to Playa de la Malvarrosa, or one of the city’s other beaches – there are dozens of seafood restaurants. After dark, head to the lively Plaza de la Reina for loads of packed bars and clubs. The action doesn’t usually get going till around 1am, when the locals begin their night out. 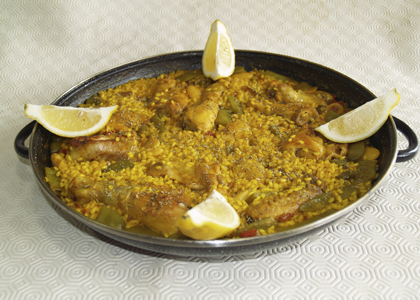 You’ll also find plenty of tapas restaurants serving the small, tasty snacks which cover anything from a handful of olives or bread and oil to grilled squid, omelette, stuffed mussels, sliced cured ham with cheese and everything in between.

Hook into tapas while you’re bar hopping – sample a few local specialities and then move onto the next bar for a few more. And don’t leave Valencia without trying Bacalao, dried and salted cod, usually served with potatoes and other vegetables. It tastes better than it sounds!

Giant squid, delectable legs of ‘jamon’ (cured ham) and piles of fresh fruit are all available in the Central Market.

Valencia’s beautiful cathedral isn’t just a hell of a sight from the outside. Inside, it is said to hold the legendary Holy Grail, used by Jesus at the Last Supper.

Get your hands on agua de Valencia. Literally it means the water of Valencia. In truth, it’s a lot tastier – a cocktail made from a base of cava (or champagne) with orange juice, vodka and gin. A sure-fire
way to get you going!

For great nightlife, head to the up-and-coming Ruzafa district, known for its innovative bars, pubs and restaurants. Dance ‘til the early hours at Le Club or Excuse Me.

WHEN TO GO: Avoid the crowds by visiting out of season.
GETTING THERE: Budget airlines Ryanair, EasyJet and Iberia all fly to Valencia. Alternatively, go by rail or coach from Madrid, Barcelona and other major centres around Spain.
VISAS: South Africans need a Schengen visa.
CURRENCY: Euro. 1 GBP = 1.21 EUR.
LANGUAGE: Spanish.
GETTING AROUND: Either walk or use local buses to cover the many sights. Taxis in Valencia are cheaper than elsewhere in Europe.
GOING OUT: A beer costs about €4.
ACCOMMODATION: Dorm beds from €12, private rooms from €20.