He’s a master at creating flawed yet sympathetic characters – and for this new play with music, he’s been given access to Bob Dylan’s back catalogue. The result is as far from a juke box musical as one could possibly imagine.

Ciaran Hinds is Nick, the late middle-aged proprietor of the boarding house he inherited and which was once kept in shape by his wife Elizabeth – until she succumbed to a cruel dementia which now affords her only brief moments of startling perspicacity but more often than not renders her as uninhibited and helpless as an infant. The bank is about to foreclose and he’s desperate to find a job for their layabout son and a husband for Marianne, their pregnant, black daughter adopted when she was dumped as a baby. No wonder, then, that Nick has found some comfort in the arms of a temporarily resident widow trying to sort out her own financial affairs. 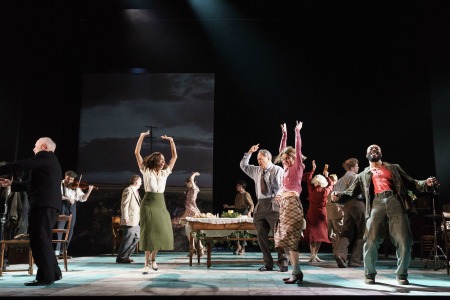 A black boxer (Arinze Kene) with a criminal record, a fake, bible-selling “Reverend” and a down on their luck family whose adult son has the physical strength of a man but the mind of a child are all added into the mix, introduced by Ron Cook’s visiting Dr Walker narrating from the side-lines.

McPherson subtly interweaves snippets of their stories, their secrets, their hopes, their despair with a score of Dylan’s songs dating between 1965 and 2012, all beautifully (though almost unrecognisably)  rearranged by Simon Hale and gorgeously sung – often in glorious harmony – with Shirley  Henderson and Sheila Atim absolute knockouts as Elizabeth and Marianne  respectively.

But this is very much an ensemble piece, achingly heart wrenching at times, in which there isn’t a single weak link – Dylan should definitely get a ticket.

Watchdog report suggests police not reporting a fifth of crimes