Now she takes to the air in a revival of American playwright Arthur Kopit’s 1978 exploration of the aftermath of a stroke. Originally conceived for radio a couple of years earlier, it was inspired by two female patients he encountered when his own father was being cared for.

Director Natalie Abrahami keeps the fictional Emily Stilson airborne for almost the entire interval-free 70 plus minutes running time. A former aviatrix and wing-walker, the elderly Stilson’s life changes completely after the flash of a sudden stroke plummets her into a limited world of bewildered confusion in which both movement and communication are stripped from her and body and brain no longer co-operate with each other. 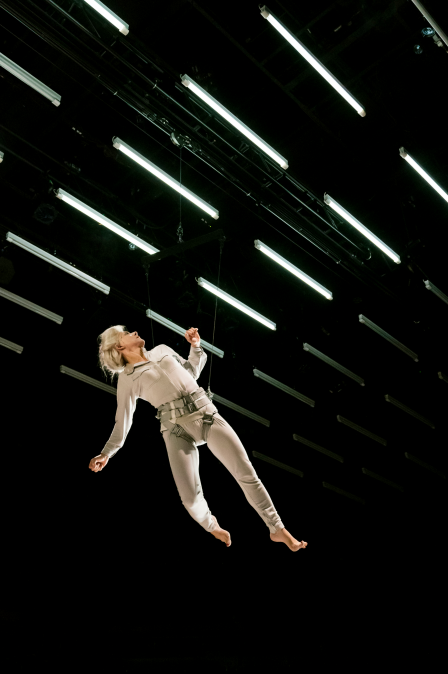 An impressive Stevenson, harnessed throughout, glides over the sliding strip of a stage which bisects the auditorium. She tumbles, twists and turns overhead, her increased contract with the ground coinciding with the gradual process of limited rehabilitation (facilitated by Lorna Brown’s encouraging Amy)  which may bring her back to some sort of normality.

Images of her previous flying adventures are projected on a gauzy curtain, as impossible for her to grab hold of as the words that now elude her.  Yet although effective as a depiction of a fractured mind, it’s the aerial aspects of the production, rather than the play itself, which are likely to linger in the memory.

Gayle force: Windies star smashes fastest century in any cricket ever in the IPL