The start of play was put back until 11.30am after a torrent of rain fell overnight leaving large parts of the outfield almost under water.

The ground staff at The Oval should be given huge credit for getting the pitch in a playable condition so early in the day.

The crowd was understandably subdued in the early overs, watching as they were not much more than a jumped-up practise session, with a result almost an impossibility unless Alastair Cook was to attempt something daring.

England were looking to bat themselves into the session however Chris Woakes fell early to Ryan Harris, who, as ever, looked the most threatening of the Aussie attack.

The England debutant hung his bat out at a scrambled seam teaser outside off, edging through to Michael Clarke at second slip.

Matt Prior came in and showed that despite his paucity of runs in the series he wasn’t going to compromise his style, lashing the ball, with varying degrees of control, to all parts. 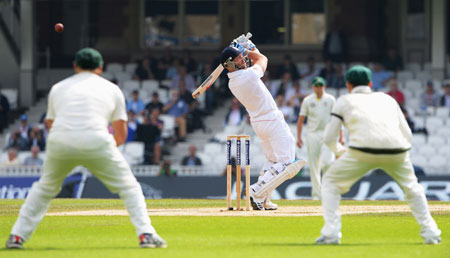 Ian Bell fell five short of his 50 edging one down the leg side from James Faulkner, with Brad Haddin taking an excellent diving catch to give the Aussie all-rounder his first wicket in Test cricket.

England passed the follow-on mark and for the first time in the match looked to up their scoring rate.

Prior looked positive, the first batsman to really take the attack to the Australian bowlers. However he was unable to build a partnership with Stuart Broad who fell to Mitchell Starc with the first ball of his spell.

The Englishman was beaten for pace and turned round to discover his middle stump unearthed. 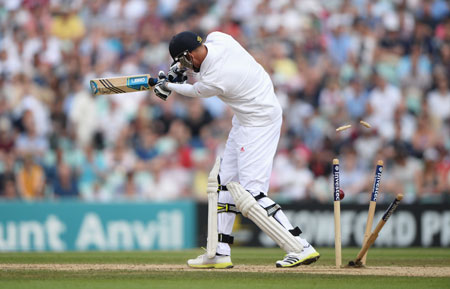 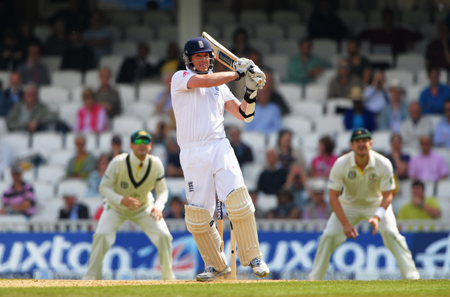 Graeme Swann came in and looked to smash the ball from the outset, rushing to a mesmeric 24 off just 11 balls.

England reached lunch on 350 for seven. Australia will be looking to knock over the remaining wickets quickly on the resumption before going out for a bash in the final session in a bid to create a defendable lead.

Cocktails in Clapham to save lives