With England fans booing his every move, Warner copped it all with a smile on his face and then bludgeoned 41 off 57 balls back at the top of the order as Australia chased quick runs.

In one of the more outstanding press conferences of the series so far, especially given the inevitability of a draw due to rain, Warner conceded: “Hooked another one to Rooty – of all the people in the field … it’s quite comical now. I can’t wait to read Twitter a bit later.”

Root’s celebration of a decent enough low catch was significant, especially considering he’d made an effort to welcome Warner to the crease in the first innings. 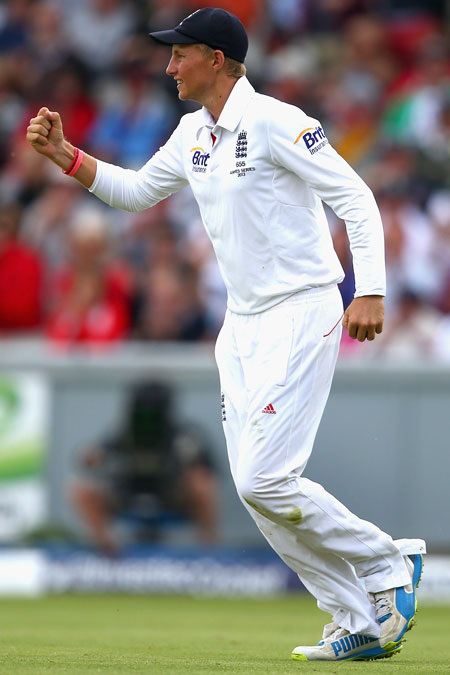 “He said to me ‘it’s been a long couple of months hasn’t it’?” Warner said. “And I turned around with a bit of a smile. I’ve got a long memory so that’s all right.”

Warner has taken his role as a panto villain with good humour, and commended the song choice of the Barmy Army’s Billy the Trumpeter, who belted out the Rocky theme when he came out to bat.

“I actually liked the trumpeter playing the Rocky theme song, it was actually entertaining,” Warner said. “I had a little chuckle. It’s not every day you walk out on the field and you get booed. You’ve just got to embrace it, know what your job is ahead of you, and that’s all I can concentrate on.”

“I’m not well liked at the moment but this morning was actually quite entertaining down there on the boundary. There was a few hungover people and a few voices that weren’t speaking what their minds were yesterday afternoon, which was fortunate. Come tomorrow when I’m out on the boundary and they’re full again I think I might cop it.”

Most to Warner’s credit, is his repeated acceptance of the Walkie incident being “all my fault”.

“I accept that and I have to keep embracing it,” Warner said. “Someone does get picked out and this time it’s me. I’ve got to keep my head down and focus on what my task ahead is and that’s scoring runs.”

“I’m just enjoying being back in the team. All my misdemeanours are behind me at the moment and I’m just happy to be playing cricket.”

It wouldn’t have been an Ashes day without some sort of controversy involving the video umpires.

Warner himself was probably out to very finely nicking a hook shot, but Hotspot was inconclusive – Snicko later showed he likely should have been given out on review, but the technology remains too slow to be used. 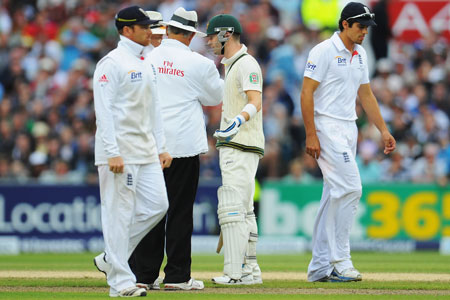 The negative tactics of the English were lambasted by Warner, with the comical over rate of Alastair Cook’s men – 12.2 overs an hour – not surprising considering all they need is a draw to retain the Ashes.

“We expected that,” Warner said. “We knew the bowlers were going to take their time. The decision they reviewed off me was a massive time-waster. They walked in a circle and actually said, ‘Let’s just hold it back a bit.’

“Broady, as well walking from fine-leg to his mark, he took his time. Me and Ussy [Usman Khawaja, with whom he added 51 for the second wicket] were talking about what we were going to have for dinner.

“The captain suffers from that. He’ll miss a game if he’s time-wasting or if the overs aren’t bowled in the time allocated. That will come back to bite them on the bum.”

Aussie captain Michael Clarke was clearly frustrated as the umpires decided light was not good enough to play, despite the floodlights being on and that he, as a batsmen most at risk of safety, was happy to be out there.