British tourists seeking flights from Cairo International Airport are reporting “chaos” on the ground as travellers scrabble for seats on a decreasing number of departures.

The British Foreign Office advice has urged those in the country to stay indoors wherever possible, or leave Egypt if it is safe to do so.

“In light of the ongoing demonstrations, we continue to advise against all but essential travel to Cairo,” said a British Foreign Office statement.

However in popular tourist spot Sharm-el-Sheikh tourists have been able to continue their holidays and are not thought to be at risk. The Foreign Office described the situation as “calm” but told visitors to remain vigilant.

Tour operator On The Go said that it was closely monitoring the situation.

“All of our passengers currently in Egypt are safe and well and are staying within the hotel premises. When possible we are taking travellers to the airport in time for their departing flights,” On The Go said in a statement. 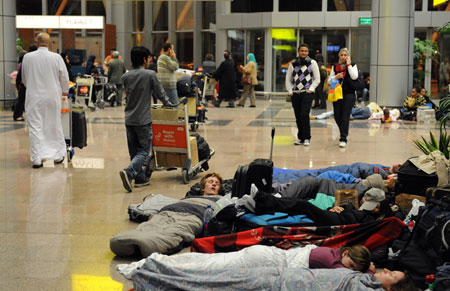 Australian Prime Minister Julia Gillard said that Australians trapped in Egypt will be evacuated aboard a government-chartered Qantas flight on Wednesday. The flight will be free for those who want to get home.

Gillard said that as a result of Australian travel advice to leave Egypt many Aussies have already organised their own flights out of the country.

The US will begin evacuating Americans from Egypt today, sending chartered planes to Cairo to fly citizens out. Assistant Secretary of State Janice Jacobs said the US was looking at Athens, Greece; Istanbul, Turkey; and Nicosia, Cyprus, as destinations.

Due to repeated internet disturbances in Egypt, spreading information about evacuations is proving difficult. The US State Department said it was relying on friends and families to relay that information to stranded Americans.

It is expected to take several days to evacuate all Americans from Egypt.

300 Indians were evacuated from Cairo yesterday and Air India said it would be sending another plane today.

Egypt’s tourism industry accounts for about one in eight jobs.

Cinema museum, London – things to do in the capital

Australia staring down the barrel in India

Geelong stars to battle it out for Brownlow