Big trip: China in your hand

Up until the 16th century, when new maritime routes opened up, the Silk Road had acted as the bridge between all the major civilisations – Egypt, China, India, Persia, Arabia, Byzantium and Rome – for more than a thousand years.

Around 30% of the trade was made up of silk, but these routes would also carry fruit, plants, paper, art, compasses, jewels, gold, gunpowder – and the Black Death. More importantly, they carried ideas, skills and DNA. The best-known start and end points of the Silk Road are Chang’an (Xian), the old capital of China, and Byzantium (Constantinople/Istanbul), but many Silk Road trips bypass those cities alltogether.

I began my journey along these ancient trade routes by travelling up from Luang Prebang in Laos by sleeper bus to Jinghong, before spending another night in a cramped bunk on a bumpy bus to arrive at Kunming. From then on, however, it is possible to travel all the way across China, to Kazakhstan and beyond through Central Asia, using the far more comfortable sleeper trains. They may cost a little more than the night buses but are reliable, far cleaner than they used to be, great value for money by European standards, provide you with a plentiful supply of hot water for instant noodles and tea, and will save you the cost of a night’s accommodation in a hostel or hotel. I’ve also always found that I sleep very well on trains, so unlike with the night buses – whose narrow bunk beds are often just a little too short for many Westerners – you don’t waste half the next day shuffling around like a sleep-deprived zombie.

Kunming, the capital of Yunnan province, is home to more than five million people. It was once a gateway to the Silk Road and acted as a crossroads for trade between India, Myanmar and Tibet. According to the tourist brochures, Kunming is also ‘the city of Eternal Spring’. On exiting the night bus from Jinghong on a chilly March morning, wearing only the shorts and T-shirts I’d been getting away with for months on South-East Asia, I was shivering so hard that I couldn’t even hold up my badly photocopied map of the sprawling metropolis.

The large parks in all major Chinese cities are always popular with the locals who are often forced to live in large, grey tower blocks. As in many of these megaparks, Green Lake Park in Kunming features a large boating lake surrounded with pedal boats, scenic tea houses, giant chess sets, brightly painted outdoor gym equipment, and several groups of enthusiastic line dancers. All over China you find groups of all ages and abilities doing their own kind of choreographed dance routines. It seems similar to US-style country dancing but, like most cultural imports, it has been transposed and modified into a uniquely Chinese form of expression.

There is none of the inhibition that you find among amateur dancers in the West and neither the dancers themselves nor the crowds that gather to watch them seem particularly concerned about just how good or bad the dancing actually is. It’s just a bit of fun and exercise. Not far from Green Lake Park is Yuantong Si, a Chan (Zen) Buddhist temple that was first built in the late eighth or ninth century. Over the years it has been restored and rebuilt a number of times. More recently it was expanded with money from Thailand. Unusually, it lies in a natural depression and you go down steps to the temple, rather than ascending. It is very popular among the huge numbers of domestic Chinese tourists (as is almost anything scenic that you can take your picture in front of). 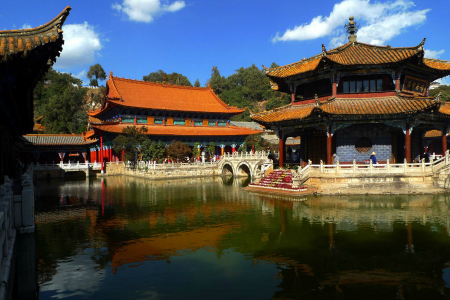 As the only Western tourist in the temple complex, I edged between the incense-lighting worshippers and tried to avoid walking into too many holiday snaps. I tried not to make a nuisance of myself and nobody seemed to mind me wandering around their holy place. Not all Western visitors have been so well tolerated. At the beginning of the 20th century, one of the French engineers who was working on the Kunming to Vietnam railway project set up house in the temple’s main building. There weren’t many nice places for foreigners to stay in Kunming at the time, so he selected the Yuantong Treasury hall as his place of residence. This didn’t go down too well with the locals who still wanted to be able to get into the temple to pray and burn incense sticks.

It took a few months but they eventually managed to chuck him out. It would be difficult to imagine a Chinese engineer coming over to England and setting up house in the nearest cathedral because he couldn’t find anywhere else that was up to his standards.

The most popular hangout that I found in Kunming is a trendy-looking café called Just Fruit. It’s full of teenagers playing cards, drinking fruit shakes and smoking (something that to UK residents can now seem strangely exotic). Unlike nearly everywhere else in Kunming, they have some English on their menu (among these youngsters, speaking English was considered to be very ‘cool’). The ice cream sundaes on the menu are particularly appealingly-named.

I was extremely tempted by ‘The Heaven of Ice Snow’ and ‘Heart Deeply Drank in a Romantic Feeling’ but eventually opted for ‘Love to get Occulty with Black Forest’.

I had meant to stay at the popular Cloudland International Hostel but got lost and ended up at another YHA instead (it wasn’t one of those ‘posh’ Chinese hostels with doors on the toilet cubicles).

Want to read more? Pick up a copy of this month’s TNT on your travels around town, or click here to read the full article.

Are you looking to explore all that Asia has to offer? Why not make TNT Tour Search your first port of call?