Last night a protest for Wikileaks founder Julian Assange was held in the Australian Embassy in London as Australian academics, artists, activists called for the release of their countryman.

Five protestors were removed only when armed police were called.

Protestors were calling for the Embassy to secure the release of Australian Assange, who appears in court today and may be extradited to Sweden where he has been accused of sex crimes.

Supporters believe that Assange’s arrest is part of a smear campaign in the wake of Wikileaks’ publishing of confidential U.S. documents.

A letter of demands calling for Assange’s release and addressed to the Australian High Commissioner was read aloud during the protest at the Embassy last night.

The letter has been signed by renowned journalist John Pilger, Australian human rights activist Peter Tatchell and a number of British-based Australians concerned over the treatment of Julian Assange.

After the protest group refused to vacate the Embassy armed police were called. A vigil was then held outside the embassy.

“Australians for the Immediate Release of Julian Assange believes that the refusal to grant bail to Mr. Assange is unjust and unwarranted.”

According to the Wikileaks supporters, “this denial of bail and present imprisonment of the WikiLeaks founder are politically driven by forces with which the Australian government are in connivance.” 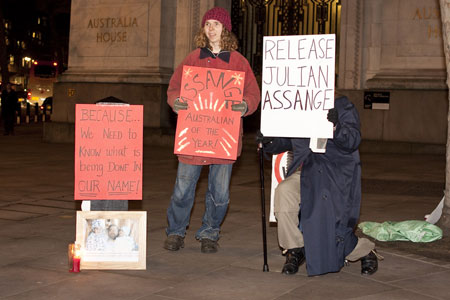 “Many of us share Julian’s background of being raised in the authoritarian state of Queensland where civil liberties were denied as matter of course. This formative experience shaped Julian in terms of his passion for free speech as it shaped us before him. Others of us are dismayed that, like Vietnam and Iraq, the present Australian government has followed the United States into another immoral, illegal and unwinnable war in Afghanistan.  Julian’s work with WikiLeaks has been courageous and revelatory. He’s in that jail for us and we’re out on the streets for him! We need to free him and bring this war and invasion of Afghanistan to an end!”