Often, they’ll pop into your inbox from well-meaning friends, or they’ll appear on your Facebook feed. You read them, smile, then dismiss them, and get back to work. However, the popular memes have become a cultural phenomenon – much to the chagrin of critics who claim these types of internet crazes are producing a dumbed-down generation of kids with a low attention span, that can’t spell.

Instead, Kate Miltner, who has recently been awarded the best Master’s degree ever from the London School of Economics, is arguing memes such as LOLcats (‘laugh-out-loud cat’) are a way of “making meaningful connections with others”. And, if anyone should know, it’s Miltner, 29, who wrote her dissertation on how LOLcats make us smarter.

In her paper, Miltner, from the US, writes: “LOLcats have spawned two best-selling books, a Bible translation, an art show, and an off-Broadway musical.

“LOLcats have also inspired the development of a massive international community; in July 2011, thousands of Cheezburger [a website dedicated to LOLcats and other LOL animals] fans converged upon Safeco Field in Seattle for Cheezburger Field Day.”

However, the concept of a LOLcat is not that new. As early as 1870, photographer Harry Pointer created a series of small images featuring cats in various situations, running with amusing text. And the word “meme” was first coined by evolutionary biologist Richard Dawkins in The Selfish Gene as “an idea, behaviour or style that spreads from person to person within a culture”.

But it’s doubtful either of these men could have foreseen that their findings would evolve into what we have today. LOLcats were given their name in 2006. Until then, the images were just “silly photos of cats with comic captions” on “daft websites”, as author Clay Shirky called them in his book Cognitive Surplus.

Today, there are hundreds of websites dedicated to serving the needs of LOLcat lovers – from Cats That Look Like Hitler and I Can Haz Cheezburger? to Caturday At X Boards Gallery and The Definitive Lolcats Glossary.

A quick glimpse at Cheezburger, which commands three million unique hits a month, uncovers two images. “stop! yer steak’z kontameenated. dun worri i eatz fer u,” are the words underneath a photo of a cat with his paw on his owner’s dinnerplate. “THAT WAS THE LAST TIME THEY FORGOT TO CLEAN OUT MY LITTER BOX,” reads another, as
a “kitteh” walks away from a nuclear mushroom cloud.

Sure, they’re amusing for a moment, but what’s the long-term appeal? What makes internet users want to engage and share these seemingly easily dismissed images? 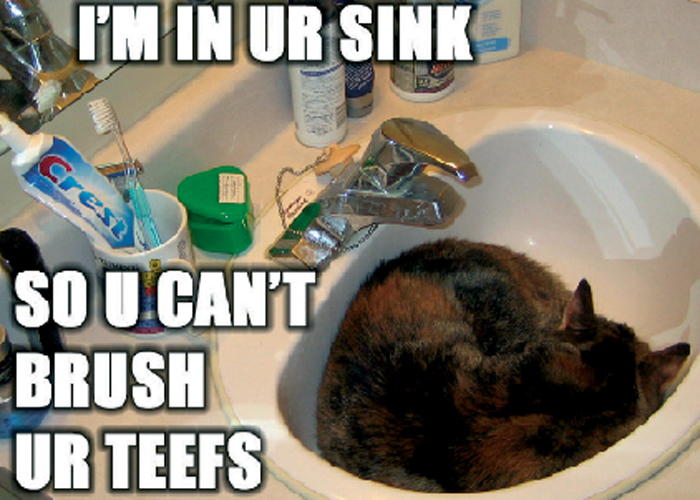 Miltner says that unlike other internet memes for which popularity tends to wane after a short period of time, LOLcats have remained “relevant and popular” for more than five years, “inspiring a devoted following”.

“Cheezfrenz” is made up of diehards who are “invested LOLcat lovers whose interest in LOLcats generally stems from their affinity for cats”. MemeGeeks establish their affiliation with the group by making LOLcats that refer to more obscure memes. Finally, there are the casual users, those who are bored at work, who share LOLcats if they find them cute or funny. They’d pass them on to friends and family as a way of keeping in touch.

Miltner says it’s not necessarily the impact of the image of the cat, or the misspelled words underneath, which have led to LOLcats’ popularity. She says: “Many LOLcats are created or shared for the purpose of interpersonal communication and emotional expression. Ultimately, LOLcats are funny pictures of cats; however, the ways in which they traffic in fundamental human needs like belonging and emotional expression are no laughing matter.”

And those who guffaw at or dismiss Miltner’s choice of subject to study, suggesting, as some have, that it’s not worthy of analysis, would be wrong, according to Patrick Davison. The PhD candidate is focusing on memes at the NYU Steinhardt School of Culture, Education, and Human Development. He says his research is important “because these are the kind of cultural interactions that people participate in these days”.

He told The Independent: “You wouldn’t blink twice if someone said they wanted to study the cultural effect of newspapers or books or TV.”

Defending her own research, Miltner is quick to point out the fact that LOLcats are so popular, with millions of people interacting and sharing, makes it worth exploring.

She writes: “What I ultimately discovered is how seemingly trivial pieces of media – pictures of cats with captions – can act as meaningful conduits to central elements of our humanity.

“They are a venue through which people express their emotions, connect to their loved ones, and define group identity. This not only gives them value; it makes them important. To quote [technology expert] Sherry Turkle, ‘some are tempted to think of life in cyberspace as insignificant, as escape or meaningless diversion. It is not. Our experiences there are serious play. We belittle them at our risk’.”

Creating LOLcats isn’t as simple as sticking badly spelled words over a photo of a cat – there are rules to follow, as well as heaps of websites offering guidance to what is a growing community.

As part of her research, Miltner put together a glossary which gives outsiders a glimpse into this ever-increasing online network. Here are some examples:

Ceiling Cat: Ceiling Cat refers to an image of a cat peeking through a hole in a ceiling.

Cheez Town Cryer: A blog that serves as a social and informational hub for the commenter community on ICanHasCheezburger.com

Image macro: An image macro is an image with text superimposed upon it. Image macros tend to be humorous in nature. LOLCats are an example of an image macro.