Despite having some of London’s greatest attractions – the Royal Festival Hall and Shakespeare’s Globe – SE1, on the Thames’s south bank, is far from just a thriving magnet for tourists. Thanks to London’s regenerative powers, it’s also an edgy, highly desirable place to live.

Such is the uplift in this pocket of the capital, Southwark Council is intent on making it London’s ‘third business district’. It’s got the faux-bohemian foodie mecca Bermondsey Street, for one, and, piercing the sky 310m into the sky, the Shard. The European Union’s tallest building has brought – and is still to bring – untold development (public space, offices, shops and residences) to what was once a fairly run-down area.

But Borough is not all shiny and new. The Borough Markets and Shad Thames, by Tower Bridge, are charming reminders of the London of old. Raj Tanna, of Williams Lynch estate agents, in Bermondsey Street, says: “Far from being ‘up-and-coming’, Borough is here now, with riverside walks, and virtually all of central London right at your door.”

The area has a diverse population, with a huge creative community, city whipper- snappers, and long-time residents. But the majority of locals are young, trendy, and flush, says Graham Freeman, of Foxtons estate agents, in London Bridge. “The Bermondsey Street scene, which, even though is very cool, has a lot of corporate money,” he adds.

Where to hang outBermondsey Street is undeniably the destination to be seen. The recently installed White Cube gallery helped confirm its place among London’s most fashionable strips. Mark O’Kane, of Stirling Ackroyd estate agents, on Borough High Street, lived in the area for four years. “It’s got everything from a greasy spoon and gift shops to really great restaurants, like Pizzaro (josepizarro.com),” he says. “And there’s a really nice buzz every day of the week, but it’s never crazy.”

The George Inn, just off Borough High Street, is London’s only surviving galleried coaching inn, and a wonderfully, ambient boozer (gkkpubs.co.uk). Maltby Street, too, is a small corner of warehouses that have become home to a handful of food retailers.
Also, over the coming years, the Shard will increasingly become an all-in-one destination. “It’s just having the most massive impact – an extra 8000 people living and working in the area, plus five-star hotels and shops. It’s huge,” Tanna says. 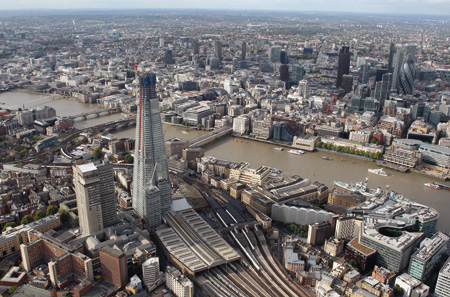 It’s in Zone One, with Borough Tube on the Northern Line. However, you have the advantage of being able to walk across most of central London. “SE1 is an easy area from where to walk to the City and West End,” O’Kane says. ”Yet you can return home to an area offering a high level of galleries and restaurants.“

Given its dockside location, there’s a preponderance of converted warehouses, lofts and boutique developments. But they sit next to modern riverside apartments and in soaring new towers, such as cutting-edge Neo Bankside. Freeman says: “Given the diversity of the properties – those at both ends of the price scale, within reason – anyone can live here.”