Men in tights (and skirts): Queensland Ballet comes to London

Playing at the London Coliseum August 4-8, TNT caught the very busy artistic director of Queensland Ballet, retired professional ballet dancer and ex stock broker Li Cunxin to find out why you should pop your ballet cherry with La Sylphide. 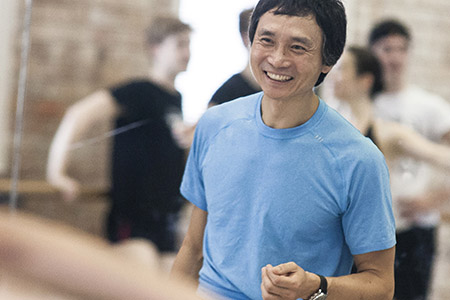 This is one of the most famous Bournonville ballets. Bournonville is a Danish ballet master who created some wonderful ballets during his time, and La Sylphide would have to be one of his most famous. It’s re-choreographed by Peter Schaufuss, who is a legendary person of our time as far as dance is concerned, and he also comes from that Danish tradition. When he first choreographed this ballet is was for the English National Ballet, back in 1979, and it was a roaring success in London and it really made a huge wave on an international stage. It’s widely considered the best La Sylphide in the world, and it won a BBC and Olivier award for choreography. So it was really well received and it’s a really beautiful production. London hasn’t seen this production for 75 years.

What is the story about?

It’s a beautiful story about the unobtainable love of this Scotsman – who fell in love with this ethereal, other-worldly sylph. Then you add this vengeful witch called Madge who messes things up for them because of her hatred for James, the Scotsman. What is beautiful about this ballet is that the Danish training is very light on their feet, so you’ve got light jumps and strong footwork to make it almost fairy-like, so you’ve got this most beautiful group of sylphs dancing. It’s a big challenge for any company in the world to do well, but I think our company manages it.

Yes, it has been performed by many other ballet companies before, so what will the Queensland ballet bring to the production?

We bring incredible energy and storytelling abilities. Peter Schauffas has worked very hard with our company to get that Danish style of storytelling and beautiful dancing. We had a roaring success when we did it in Australia. We sold out nearly all the performances two months before we even opened, so there was enormous excitement and the critics raved about it.

Is La Sylphide a good place to start for ballet virgins?

Definitely – it has that fairytale feel to it, and the story is so well told in Peter Schaufuss’s production that even if you’ve never seen ballet before and you know nothing about the story, you will really be enthralled, enjoying the unfolding drama, the story, the beauty and also the beautiful music.

I understand there are some third-generation dancers in this production, is that right?

Yes, Peter’s parents were very much involved in the production, and then Peter is a very famous Danish dancer, and then both his son and his daughter will be a part of this production. We’ve also got two wonderful Cuban stars, we’ve got a fantastic Chinese leading principal on the opening night, we have fabulous dancers from Argentina, America, Korea, Japan, and Australia of course – so we’ve got a truly international company.

What do you love about ballet?

It’s just absolutely beautiful – it’s an art form that has not only beauty but athleticism. It combines beautiful music, costume and set. It can really take you on a journey and move and touch you because of the sheer beauty of the movements.

You were a professional dancer yourself, selected to train at the Beijing Dance Academy at the age of 11. It sounds pretty intense: you trained 16 hours a day, six days a week for seven years. What are your memories of that time? Do you feel like you lost part of your childhood?

It was fantastic. Sure I didn’t have much of a childhood – after I left my hometown at the age of 11, ballet for the next seven years was very much all-consuming; but I’m grateful for the fantastic training I had, which is probably considered the world’ s best training. And that sheer discipline, that sheer determination, it has truly given me so much in technical skills and it helped me to discover my passion in my life, which is ballet.

Then in an incredible twist of fate I was invited to go on a scholarship to study in America, as one of the first two cultural exchange students ever allowed out of China. Looking back, it seems incredible considering my very poor, poverty-stricken upbringing.

There is generally less discipline in Australia and England – but do you encourage that level of training? And do you think we can produce as good dancers as China?

I don’t think we can work our dancers that hard and those long hours these days. Having said that, we do work them very hard, we have a very disciplined environment – but we are also trying to be as nurturing and motivating as possible. Discipline has to be a major part of any dancer’s success.

So for example with the two-week rehearsal for La Sylphide, what sort of hours are we talking?

You retired from ballet and had a stint as a stock broker – what was behind that decision?

As a child I always had a dream to help my family in China. I have six brothers and so I always wanted to help change their lives, change their fates; I wanted to help set them up with business ventures so they could look after themselves. I also have three young children myself, so have the responsibility to get them well educated and so on. I was interested in the business world, particularly in the financial world. I got the opportunity to do some work experience at a stock-broking firm when I was injured soon after I arrived in Australia.  From then on I thought, ‘I could really make this work’. I did very well in the financial market and I have to say I quite enjoyed it. I did it for about 12 years, but that passion, that love for ballet never left me.

And obviously you returned to ballet as you’re now the artistic director at Queensland Ballet – how did that come about? Did they approach you?

Yes, I was approached when they were looking for a new artistic director, and I really felt the passion was still there for me. I felt I could pass on my knowledge and make a difference in other dancers’ lives and maybe make a contribution to the dance form, so that’s the reason I came back.

You met your Australian wife in London – is that right?

Yes – well we first met in China. She was with the English National Ballet performing in China and then later on we met up again in London – that was the first time we really met. My then artistic director Ben Stevenson – who is British and a former principal dancer for the National Ballet – he invited Mary to dance with me as my partner at the Houston Ballet, and that’s when we fell in love.

Have you visited London often?

I danced four times in London before I retired, and I love it. I take my family there as tourists and there’s something magical about it.

You were born in China, then you lived in the US, and now you live in Australia with your family. It seems like Australia has really embraced you: Your book Mao’s Last Dancer has done really well over there, you’re artistic director of the Queensland Ballet, you were even voted Queensland Australian of the year 2014 – do you see yourself as Chinese or Australian, or a bit of both?

A new Staycation guide for the UK and Ireland