Instead, the woman will be sent to Papua New Guinea (PNG) after Australian prime minister Kevin Rudd announced never again will the country accept asylum seekers arriving by boat in a deal that’s been signed by the two countries.

To show they’re serious about the controversial policy, which has sparked debate around the world, the Labor party last week released these images and a video of 81 asylum seekers being told they won’t be going to Australia – publicising them on their website and on Twitter.

The photo above, taken inside the Christmas Island’s West Point temporary immigration detention facility, was captioned: “A female asylum seeker comes to terms with the fact she won’t be settled in Australia.” The news release issued with the images was headlined: “81 Iranians get the new message: you will not settle in Australia.”

Christmas Island Department of Immigration regional manager Steven Karras said: “The message we did give them was quite clear, in terms of where they will be processed and I think that probably sank in a bit.” He added a number of asylum seekers wouldn’t have made the journey to Australia on a smuggler’s boat if they had known the rules had changed. “I’m sure they’re now thinking about whether it was wise to come in the first place. And I think, in fact, over the coming days … they will start to contemplate very seriously whether in fact returning home is a better option.” 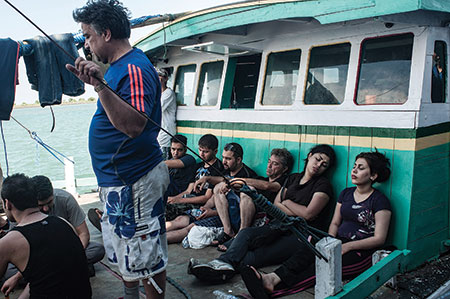 Rudd signed the treaty with his PNG counterpart Peter O’Neill two weeks ago. It means boat arrivals claiming refugee status in Australia will instead be sent to PNG for assessment and, if found to be refugees, settled there, while those found not to be refugees could be detained in PNG, returned home if possible or be sent to a third country.

In return, the Canberra government will provide fresh aid to PNG for hospitals and universities and pay “resettlement costs” for the refugees. Announcing the draconian rules, Rudd said it was “a clear and undiluted message to every people smuggler in the world that your business model is basically undermined”, and there was no limit on the numbers of asylum seekers PNG would take.

The 81 asylum seekers could now be destined for Manus Island – an Australian-run detention centre in northern PNG where, according to a former security guard, rape and torture is rife. Speaking out about the conditions, whistleblower Rod St George told Dateline on TV’s SBS ONE the centre wasn’t fit to “serve as a dog kennel”.  He said: “I’ve never seen human beings so destitute, so helpless and so hopeless before,” describing repeated instances of rape and sexual abuse between asylum seekers with the full knowledge of staff.

“We might separate people in those circumstances on the mainland, but there aren’t any facilities at Manus to do that he said, so these people who have been assaulted are forced to remain back in the tent.” 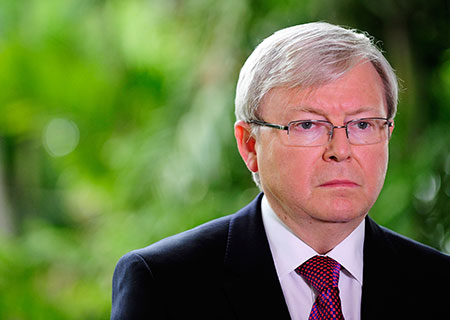 But, despite the claims, Rudd said he has no plans to change his hard-line stance. And the news has lifted Labor’s rating on this issue, with the latest Newspoll showing support rising six points to 26 per cent, while the Coalition’s dropped 14 points to 33 per cent, compared to February results. Former PM Malcom Fraser said the allegations about mistreatment on Manus Island indicated a lack of accountability by Australia’s Immigration Department.

“They’ve allowed the most terrible conditions to prevail. What’s happened on Manus is not new. It’s been going on for months and months. The department have known that, and it’s only public exposure that has brought it to light, [and] brought about, hopefully, some change.” He also called for a royal commission into Australia’s management of offshore asylum seeker processing, describing it as “an abdication of our basic humanity”.

Human rights groups and politicians around the world also condemned the move, with PNG opposition leader Belden Namah calling it an “agreement between two madmen”. He said Rudd and O’Neill had had no regard for UN conventions, and urged for the treaty to be debated in the nation’s single house of parliament. “O’Neill is making decisions like a chicken with no head,” he said, adding PNG should not make money from asylum seekers. 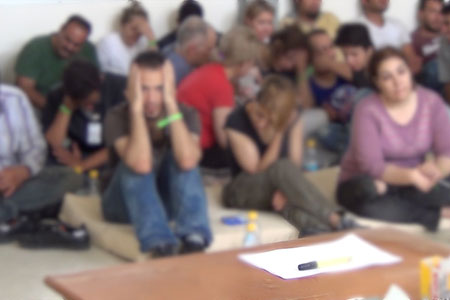 Just days after Rudd made the announcement, at least 15 people were killed when an overcrowded asylum seeker boat carrying more than 200 people sank off Indonesia’s coast. It was bound for Australia. Home Affairs Minister Jason Clare said he’d heard reports of people smugglers telling would-be asylum seekers to get on to boats before the policy came into force. “Every lie you can think of is now being told to encourage people to get on to boats,” he said.

It prompted a response from the world’s top body for the protection of refugees, which said it is troubled by the policy, citing significant shortcomings in the legal framework. The UN High Commissioner for Refugees said: “Australia’s Regional Resettlement Arrangement with the Government of PNG raises serious, and so far unanswered, protection questions.”

However, it seems Australia isn’t for turning. Bob Carr, Australia’s foreign minister, said the party was standing firm despite the UN’s concerns. He added: “You’ve got to break this model of people-smuggling, otherwise it’ll occupy more and more of the immigration intake to Australia.”

Celebrate Halloween with a recipe from Tom Kitchin