Rock and roll: breaking bones with the US Roller Derby

Roller Derby was the brain child of Chicago promoter, Leo Seltzer, who created the sport in 1935 to drum up business for the Chicago Coliseum at the height of the popularity of roller skating. These days, it’s a fiercely competitive, blood-thirsty sport for ruthless chicks on wheels. We chat to two US Derby stars who are rolling into town next month.

Hey Fisti, which position do you play?
I am predominately a blocker, but used to be a jammer. Before I moved to New York, I was almost exclusively a jammer.

Can you explain the difference?
The jammers are the girls with stars on their helmets and they score points by passing blockers of the opposing team. The blockers on the track try to stop the jammers passing.

What are you known for on the track?
I am a team player, so I don’t go for the big hits. I am a booty blocker and I am good at holding the girl behind me without going in for hits. I am known in the national team for the ‘glam block’. It’s where you stick your shoulders back and your butt out. Then you look over your shoulder and sneer.

What do you love about the Derby?
Roller Derby is kind of the punk rock answer to, well, anything really. But it’s changed. It’s become a lot more professional, so there are things that I miss about the old days, but there are a lot of awesome things that the Derby is doing. 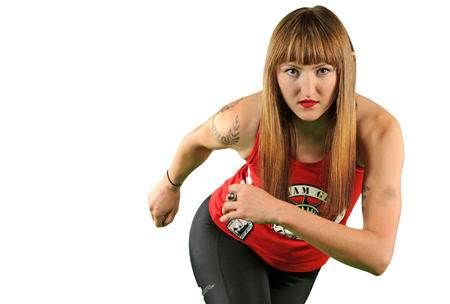 What do you think of films like Whip It?
I think that Whip It definitely bumped the awareness and the level of the sport, but the message of Whip It that I thought was really great was that it’s all about the community of Roller Derby. I also thought the film got a lot of younger girls interested in the sport. Since the film there has been an exponential growth in junior Roller Derby leagues across the US and internationally as well.

How accurate is the film, in your opinion?
Well, you know, it’s a movie, so movies are always not real life, but I like the community aspect. And it’s played on a bank track which is less common than a flat track. But it’s a little bit more fun to watch in a movie. When most people say they play Roller Derby, they’re talking about flat track.

Have you had many injuries?
During one of my very first games I broke my nose, but that was also before there were any kind of safety requirements. But since then, I’ve just had bumps and bruises. I broke my thumb in April of this year and I had to have surgery. I have my X-ray as my phone screen saver. We’re always proud of injuries – they’re almost like a badge of honour.

What are you looking for in a player?
Skating skills, how fit you are, how strong you are – those are the most important things. But obviously your knowledge of the game and your ability to play with teammates.

And a tough name?
Yes, that always helps. It’s funny because I’m not particularly tough, I am very humble but Fisti definitely sounds tough – and cool. 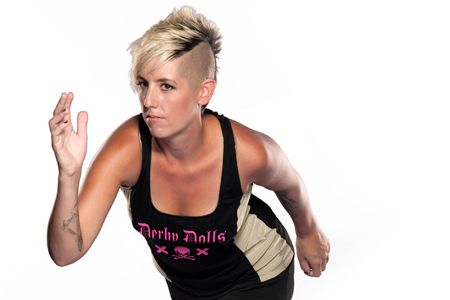 Hey Gori, how did you get into Roller Derby?
I was living in LA and I was looking for something athletic to do and I didn’t want to just go to a gym. I was on MySpace in 2006 and I was hopping around my friend’s pages and a little pop-up ad came for Roller Derby, I was like ‘what is that?’ I had grown up in-line skating and it caught my attention, I googled it and found out I had a league close by me, so I went and joined. And now I’m Gori Spelling!

I wonder how Tori Spelling feels about your name?
I actually got to meet her a few years ago and she was so excited about it. She even signed my helmet.

Have you always been sporty?
Growing up I was into individual sports. I did sailing and horseback riding and briefly I played co-ed hockey in college, but then I took a break from sport. When I found Roller Derby, at first I was unsure about a team sport with a bunch of women. It seemed like a lot of attitude but it’s been great and I wouldn’t give it up for the world.

How much attitude is there on the track?
It kind of depends, some skaters own their personas a little more than others, but I actually tend to be pretty mellow on the track. If someone starts to get in my face I ignore them and that usually pisses them off even more.

Can you tell me what the Derby term ‘can opener’ means?
Actually in LA we refer to that as a ‘rock block,’ because you’re rocking your shoulder backwards to make contact with the other skater’s chest or torso area.

What is the biggest myth about Roller Derby?
If people haven’t seen modern Roller Derby, they remember the televised stuff from the Seventies which was scripted, with fake fighting. That’s the biggest misconception.

What’s the training process like?
It tends to be a lot of off-skate training, so in sneakers. We do a lot of weights and cardio to keep up our fitness levels. In LA we’re lucky enough, not only to have a bank track, but also a flat track and we’ve found it’s best to skate both surfaces. It’s slightly differing training, but makes us more well-rounded skaters.

You’re handpicking some Aussies to join you on the track, what are you looking for in a player?
I think overall skate skills, fitness and how well they adapt. The boot camp is four days and they’re gonna have to learn bank track and adapt to this pretty fast.

What advice do you have for girls thinking about the sport?
They should go and check out a local game, and if they like it, try out for a league. Most towns have a program for Junior Derby

Would you encourage your daughter to play?
Yeah I think it’s great. When I started playing, it made me more confident, I became a better team player at work. I don’t have any reason why I wouldn’t let my daughter play. Although, I don’t want kids – but hypothetically yes!