For most of the world’s population the word ‘Australia’ immediately conjures images of sun kissed bodies lying on pristine white sand, gazing out laconically over rolling blue surf.

It cannot be denied that Australia’s enormous coastline has some of the world’s most beautiful beaches, best surf breaks and iconic seaside towns for everyone to enjoy. We’ve taken a look at six of our favourites and rounded out our top 10 list with four beaches from around the world.

Next door neighbours New Zealand get a little love, as do perennial surf and sand heavy weights Hawaii, and another nearby southern hemisphere destination – Indonesia. These are just a few of our favourites, whetting our appetite for the coming summer. Bring it on! 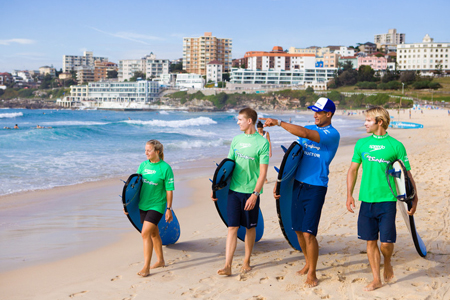 Surf here because: One of the most iconic and best known beaches internationally, Bondi, for many, is the tangible symbol of the Australian dream. Set in the heart of Sydney’s eastern suburbs Bondi has transcended the ingredients of what makes up a beach; sand, water and sun to become an absolute icon. Whilst you could easily argue from a surfing point of view that it isn’t even in the top 10 breaks in Sydney let alone Australia, on a good day decent swells come up at both ends. Perhaps the biggest draw card of Bondi, though, lies off the beach. The suburb of Bondi is one of the cultural hearts of Sydney’s eastern suburbs. Full of bars, restaurants, live music venues and clubs, Bondi also has one of the largest concentrations of backpackers in Sydney, with travellers from all over the world converging on Bondi to come and experience a slice of Australian life.
Where to get a beer: Grab an ice cold Corona and a burrito at Beach Burrito, an institution overlooking north Bondi.

Surf here because: With lots of surf camps and lessons running throughout the summer months this beautiful stretch of Shoalhaven on the New South Wales south coast is hugely popular with those who are uninitiated with catching breaks. In fact, Seven Mile Beach is often called Australia’s best “learn to surf” beach. It’s gentle surf and forgiving breaks afford beginners the perfect place to learn whilst offering intermediate borders with some slightly more challenging breaks as well. Aside from the water this part of New South Wales is famed for its natural beauty and is perfect also for keen anglers. Nearby towns of Gerroa and Gerrigong feature good accommodation options as well as plenty of places to eat and drink whilst the beach is only forty minutes from the cosmopolitan hub of Wollongong.
Where to get a beer: Best grabbing a six pack or two and an Esky on your way through Wollongong because this beautiful little spot is fairly secluded.

Surf here because: One of the most popular tourism spots in northern New South Wales, Byron Bay is littered with great beaches including Wategoes and the Wreck. The area has been a treasured sport for surfers since the 1960s. Forming the most easterly point of the Australian mainland at the meeting points of the Coral and Tasman seas, surfing is great all year round. Byron Bay also offers numerous other water activities including whale watching, hang gliding, sky diving as well as coastal walks, snorkeling and scuba diving. Byron Bay also has a vibrant nightlife scene with backpackers, tourists and locals mixing readily year round. Also a short drive from Hippy paradise Nimbin, Byron is one of Australia’s most interesting and exciting beaches.
Where to grab a beer: Byron’s Beach Hotel offers beautiful views from the beer garden and a lovely relaxed atmosphere. 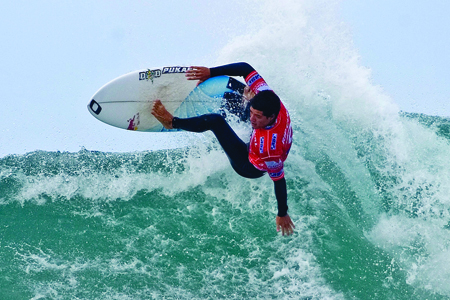 Surf here because: This break plays host to the world’s longest running Surfing Competition, the Rip Curl Pro Surf and Music festival. Bells is one of Australia’s best known surf spots. Considering the surfing pedigree it is a spot really for the experienced. For the less experienced surfers nearby spots including Johanna’s offer slightly easier conditions to still enjoy. Located near Torquay on the beautiful Great Ocean Road region the area is great for sightseeing, with great vantage points all along the coast. The town of Torquay too offers a good home base with plenty of activities to keep you occupied when not tearing up the surf.
Where to grab a beer: Set in the heart of seaside town Torquay, Let of the Rocks offers a little bit of everything whether you’re after a quiet beer, a quality meal or an all night rager.

Surf here because: Noosa’s main beach is only minutes away from the shopping hotspot of Hastings Street and is great for all sorts of beach activities. Whether you’re keen to catch a few waves, refresh yourself with a swim, or just lounge about on the beach, Noosa has it all. Noosa’s Hastings Street is also full of things to do once you’re finished on the beach with lots of restaurants and bars as well as lots of shops and markets. Whilst the main beach may not offer the best waves, nearby Castaways and Marcus beaches offer much better surf for the intermediate to advanced surf groups.
Where to grab a beer: The Coolum Surf Club is right on the sand on Noosa’s Main Beach and offers something for everyone with live entertainment on the weekends as well as cheap meals and tap beers every night.

Surf here because: Birthplace of one of Australia’s greatest surfers, Taj Burrow, Yallingup in the heart of the Margaret River has a real surfing pedigree. Some of the best breaks to be found in Western Australia are found around this area including Smiths, Three Bears and the powerful Super Tubes. Surfing isn’t the only attraction to the area, though. The Margaret River is known as one of Australia’s premier wine producing regions and Yallingup is so close to a number of top vineyards. Art Galleries too are in great supply. Nearby Busselton provides the main shopping areas and facilities to stock up on supplies.
Where to get a beer: The Caves House Hotel has been the whistle–whetting destination for visitors to the area for over 100 years. Famed throughout WA for its Sunday sessions and the beautiful views on offer from the beer garden. 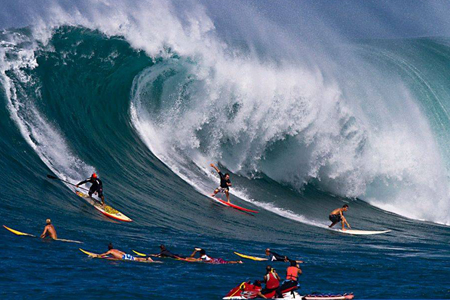 Surf here because: Between November and February this stretch of pristine coastline on Oahu’s North Shore becomes a big wave surfing mecca attracting some of the best surfers from around the world. In the summer months, though, the surf quietens down, becoming more tranquil and approachable for us mere mortals. In the placid winter months the spot becomes a great place for swimming, scuba diving, rock climbing and a place to test ones nerves at the huge ‘Jump Rock’. Waimea Bay has been popularised and immortalised in many songs including the classic Beach Boys hit number Surfin’ USA.
Best place to grab a beer? There are tonnes of little bars tucked away a long the shore line, but a real must try item in Waimea is from Giovanni’s Shrimp Truck, try the garlic shrimp which he sells, obviously, off the back of his truck.

Surf here because: Not so much one beach, as hundreds, this chain of islands off the coast of Sumatra offer some terrific surf conditions and are best known for their surf tours. Cruising boats and crews can be hired to ferry you and your friends to the best spots depending on the conditions. There are beaches and breaks to suit all levels of surfer from beginner to veteran. You can also stay on one of the islands at picturesque holiday resorts like WavePark where one can indulge in all the other idyllic island holiday pursuits that need not have anything to do with surfing like snorkeling, swimming or just lazing in the sun.
Where to grab a beer? You’re best off asking the skipper of your vessel if he’s got any Bintang stashed below decks somewhere. Chances are he will. 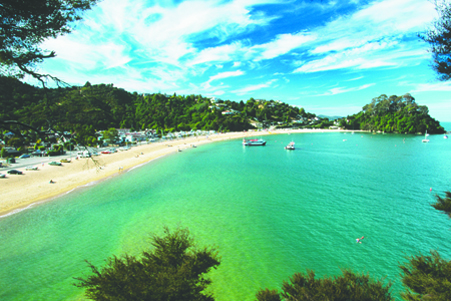 Surf here because: Its natural beauty and isolation, rugged coastline and the forested Waitakere Ranges offering walks. This is the birthplace of New Zealand surfing in the 1950s. You’ll find this break 39kms west of Auckland city centre in New Zealand. Hosted numerous national and International surfing championships, it is naturally one of New Zealand’s most popular and famous beaches.
Where to grab a beer? Probably your best bet would be to head back into Auckland. The Northern Steamship Co in the heart of the city is a great place for a cold one.

Surf here because: This beach 60 kms north of historic Nelson in New Zealand’s south island logs the most amount of sunshine hours of any place in the country. Well known throughout the South Island as a great place to surf it is also less congested in the warmer summer months. Boats and kayaks can also be readily hired on the beach if surfing isn’t really your thing. Nearby Kaiteriteri Mountain also has world class mountain bike trails as well as beautiful scenery for trekking.
Where to grab a beer? The House of Ales in Nelson is definitely one for fans of beer. One of the largest selections of craft beers to be found anywhere on the South Island.