The Stones, who have been celebrating 50 years at the top of the rock ‘n’ roll game this year with a slew of exhibitions and films about their career, announced via Twitter a warm-up show in Paris this evening at the 700-capacity Trabendo theatre in the city – the show costing a mere £12!

Guitarist Ronnie Wood hinted earlier this week to the NME though that there may be more than one warm up show for the group who are currently holed up in the French capital rehearsing for their four shows:

“There’s going to be little club gigs that we’re gonna surprise ourselves to do as well, we’ll bung a few in the next few week or the week after, so look out.

The four shows, which include two nights at the O2 in November and two at the Prudential Centre in Newark, New Jersey in December.

All the shows for the crusty rockers sold out in minutes.

Their latest single Doom and Gloom was released on October 16th. 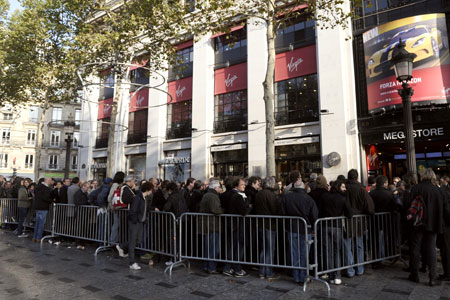 Stones fans queue outside the Virgin Megastore in Paris, off the Champs Elysees, for tickets to this intimate show.

Bobbing for apples with sharks: do it at Alton Towers