Ewelina was born in the town of Oświecim (Auschwitz to me and you). Like her neighbours, she was raised in a normal looking house in the town. We were shocked that people could live so close to where so many were murdered, but they do today as they did during the occupation. Houses, a church and a school overlook Auschwitz.

Ewelina has been a tour guide for eight years at Auschwitz and told the story of what happened there passionately. The tour was enjoyable (not an adjective I would have previously connected with the camp), professional, intelligent and deeply moving. Thank you Ewelina.

Tours are available in English, Spanish, Italian, French and German, English being the most prevalent. Thanks to Pawel we had Ewelina to ourselves, which made the experience very personal to us.

We arranged for SeeKrakow to pick us up from the Radisson Blu (Straszewskiego 17, 31-101 Kraków, +48 12 618 88 88) and take us to Auschwitz. We stayed at Auschwitz I for two hours and moved on to Auschwitz II – Birkenau for an hour and a half. The camps are about 75 minutes from Krakow.

We start the tour underneath one of the most infamous entrance gates in the world ‘Arbeit Macht Frei’ (Work Makes You Free). It is a replica, the original was stolen in 2009 and discovered a few days later in three pieces. For safe keeping it is hidden away within the walls of Auschwitz-Birkenau State Museum. 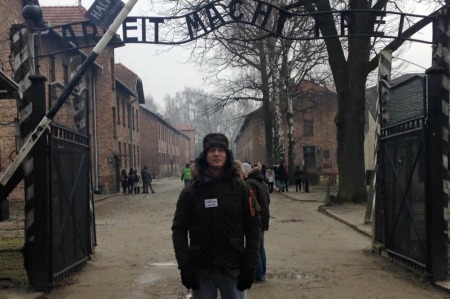 Editor James Clark at the entrance gate to Auschwitz

Once beyond the entrance Ewelina took us passed the kitchen blocks, where the camp orchestra once played, as prisoners marched to work.

It’s inside Block four that the harsh reality of Auschwitz starts to come to life. Exhibits included the original gas chambers design drawings, tins of Zyklon B that were used to exterminate prisoners and mugshots of some of the dead. The Nazi’s soon realised that taking photos of prisoners was a waste of money, so photographic records only exist for the early days of the camp. 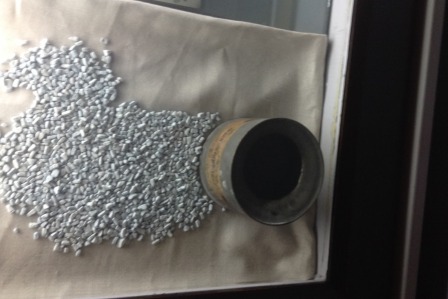 Prisoners were stripped of their personal possessions on arrival at the camp.  Masses of false limbs, labelled suitcases, glasses and shoes are piled high within the walls of Block five. 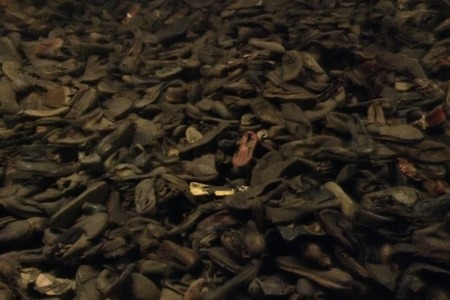 Other blocks reveal prisoners living conditions – communal toilets and sackcloth or straw on concrete floors for beds. Prisoners were allowed to go to the toilet twice a day and bedding was so full of lice that it was impossible to sleep.

Block 11 was known amongst prisoners as ‘The Death Block,’ no prisoner left it alive. To the left of the block stands the ‘Wall of Death’ where thousands of prisoners were stripped naked and shot by the SS. It is within the cramped cellars of the block that Zyklon B was first used experimentally on 650 soviet prisoners. It was hailed a great success, all 650 were killed without effort. Other prisoners were brutalised, tortured and tormented within the block in truly horrifying ways.

There are blocks not open to the public such as the block where Dr Josef Mengele’s carried out experiments on prisoners. His favourites were the deadly genetic experiments that he carried out on twins.

The Auschwitz I tour concluded with a tour of the gas chamber and crematorium. The furnace could burn 350 corpses a day. The gallows outside the gas chamber were built to hang camp commander Rudolf Hoss in 1947. It overlooks the house that he shared with his wife and children. 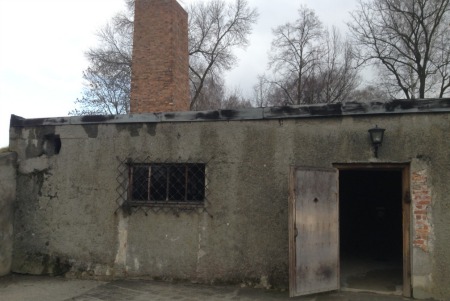 Ewelina made her way on to Auschwitz II a head of us while we grabbed a slice of pizza and a coffee and made our way over to the camp with Pawel. He answered our questions and was very helpful on our short drive to the carpark outside Birkenau. 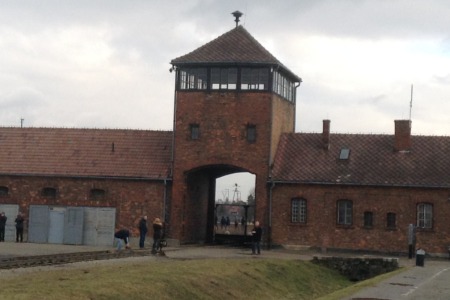 We were soon facing the ‘Gates of Hell’ with Ewelina. We felt the sheer horror of what happened as soon as we walked into the concentration camp. It’s is on a massive scale (to see it is to believe it), large enough for 300 barracks and buildings, over 175 hectares. 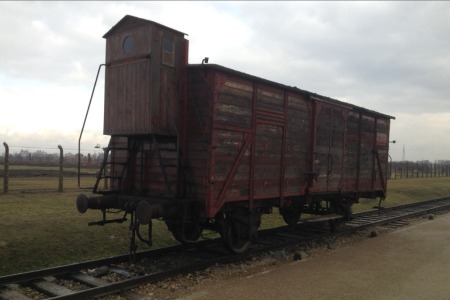 The train tracks into Auschwitz II remain and so does a train carriage that transported prisoners (predominantly Jews). On the platforms 70 per cent of arrivals were bundled straight into gas chambers. Men died first while women and children waited outside to go in and face the same fate. Those that were chosen fit for slave labour were starved, treated horrifically and once no longer of any use taken to the gas chambers. Prisoners were expected to die of some sort of disease within two to three months of arrival.

The gas chambers are marked by a pile of rubble. When the Nazis realised that the Soviets were advancing they did their best to destroy all evidence of their crimes. It was an impossible task. The soviets were confronted with thousands of bodies, thousands more dying from starvation and tonnes of ashes everywhere. It was difficult for them to work out who was a live and who was dead.

Auschwitz II is the most notorious extermination camp. It held 100,000 slave labour prisoners in 1944 alone.

At the end of the camp, stands a memorial that was unveiled in 1967.

I for one was relieved to leave the camp behind. Time has somehow managed to stand still, I don’t think the negative energy contained within Auschwitz 11 will ever leave.

Into the Wild: Tassie’s west coast