Street parties break out in Brixton over death of Thatcher

Hundreds gathered in outside the Ritzy cinema in Brixton to open champagne, burn pictures of the Tory leader and chanted “Maggie, Maggie, Maggie – Dead, Dead, Dead.” 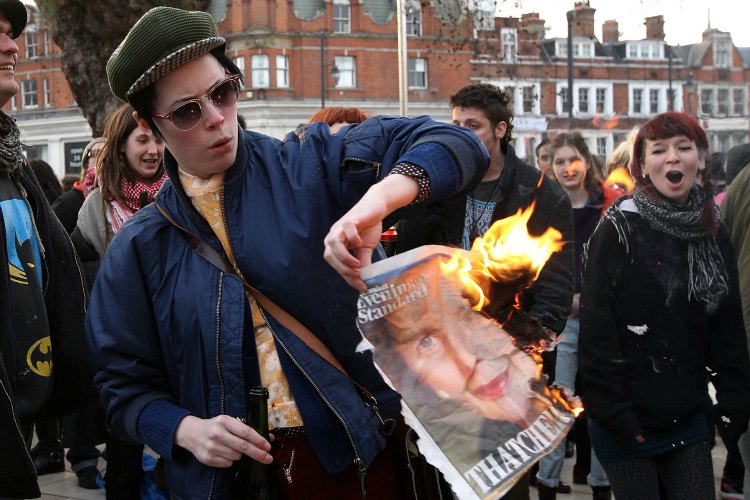 One of the protesters, 62 year old teacher Clive Barger told The Guardian “It is a moment to remember. She embodied everything that was so elitist in terms of repressing people who had nothing. She presided over a class war.”

Staff at Brixton’s Ritzy, concerned that their cinema was being hijacked for political messaging said  “Some the protesters/revellers have climbed up on our redograph and written their own messages, this is not our doing people!”

“Holding a party to celebrate the death of any person is totally wrong and in extreme bad taste — to do so in respect of Baroness Thatcher on the day of her death is utterly disgraceful,” Labour’s shadow business secretary Chuka Umunna told The Evening Standard. 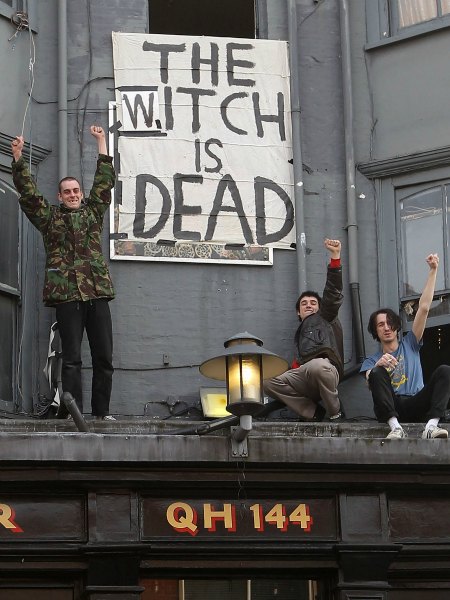 Elsewhere in the UK around 200 people gathered for a celebration in Bristol which turned violent. Six police officers were injured. There were also public gatherings and drinking on the streets of Glasgow. The BBC reported that around 250 people gathered in the square outside the city chambers last night in the city centre.

Lambeth counciller Alex Bigham called the protest ‘disgraceful’, saying “Even if you detested her policies, many of which I did, it is tasteless posturing.” 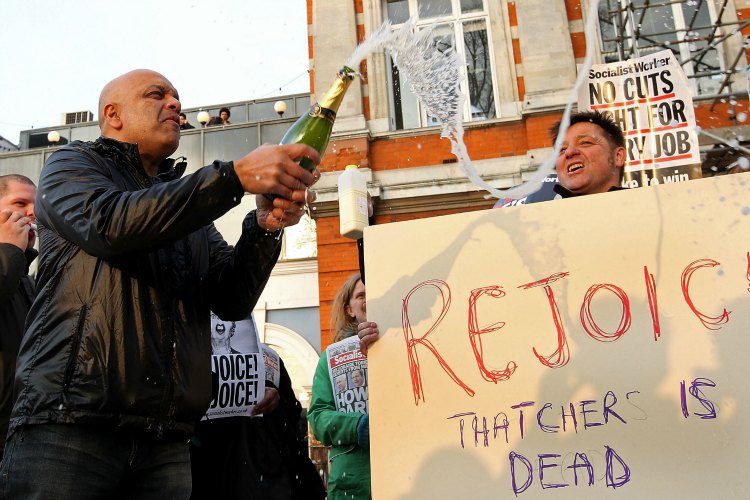 There was an outpouring of anti-Thatcherism as The Iron Lady’s death from a stroke was announced yesterday. The hashtag #nostatefuneral was the second biggest trending topic on Twitter in the UK.

Ex-London mayor Ken Livingstone told Sky News “She created today’s housing crisis, she produced the banking crisis, she created the benefits crisis. It was her government that started putting people on incapacity benefits rather than register them as unemployed because the Britain she inherited was broadly at full employment.

“In actual fact, every real problem we face today is the legacy of the fact she was fundamentally wrong,” concluded Livingstone.

Ex-MP Louise Mensch criticised the furious statements on Twitter, saying “Pygmies of the left so predictably embarrassing yourselves, know this: not a one of your leaders will ever be globally mourned like her.”

“We’ve been waiting for a long time to hear the news of Baroness Thatcher’s demise and I can’t say I’m sorry. I will not be shedding a tear for her,” said the general secretary of the National Union of Mineworkers, Chris Kitchen.

The Guardian’s editorial on the death of Thatcher concluded “Her legacy is of public division, private selfishness and a cult of greed”

In a statement, US president Barack Obama said “The world has lost one of the great champions of freedom and liberty, and America has lost a true friend.”

“Thatcherism was a national catastrophe, and we remain trapped by its consequences,” said The Independent’s political columnist Owen Jones.

“Finally I get to wear my black suit and tap shoes together” tweeted Scottish comedian Frankie Boyle.

“Monday was a very sad day. Not since the death of Winston Churchill 48 years ago has the passing of a political figure mattered so much. A great, indomitable spirit has left the stage. We should all marvel,” said the Telegraph’s Peter Oborne.

“How should we honor her? Let’s privatize her funeral. Put it out to competitive tender and accept the cheapest bid. It’s what she would have wanted.” said left-wing film director Ken Loach, according to Yahoo Movies. The funeral at St Paul’s Cathedral is expected to cost around £8 million.

TNT reader Sharon Moller said on Facebook “Whether or you agree with her politics, she was a democratically elected prime minister. I think it’s unfair when people speak like she was a dictator, and disrespectful of people in other countries who truly suffer under real authoritarian regimes.”

In a column for The Daily Beast, singer Morrissey said “As a matter of recorded fact, Thatcher was a terror without an atom of humanity.”

A spokesman for the Labour party said “[Labour leader] Ed Miliband categorically condemns any celebration of Lady Thatcher’s death. As he made clear yesterday she was a huge figure in British politics and on the world stage. While the Labour Party disagrees with much of what she did, we can respect her personal achievements.”

A Facebook group dedicated to getting the song ‘Ding Dong the Witch is Dead’ from The Wizard of Oz to the Number 1 spot this week has resulted in the song entering the top 30 of the iTunes download charts.

BuzzFeed asked some attendees of the Brixton gathering to write about why they turned up on handheld whiteboards, which you can read here.

Anti-Thatcher celebrations are also planned to continue this weekend with a celebration in London’s Trafalgar Square. 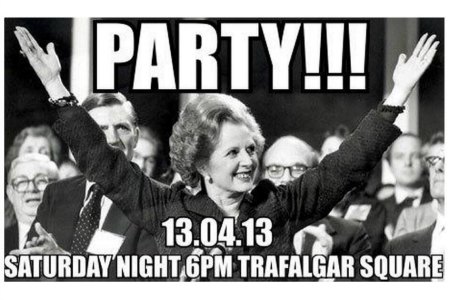 RIP Margaret Thatcher – her final wish was to be cremated but we’ve no coal left.

Tramp the dirt down.

“She stands as an example to our daughters that there is no glass ceiling that can’t be shattered.” —Obama on Margaret Thatcher’s passing

Pygmies of the left so predictably embarrassing yourselves, know this: not a one of your leaders will ever be globally mourned like her.

Extra officers have been deployed to deal with a group of people who met following the death of Baroness Thatcher in Brixton.