London is unrivalled as number one.

Sydney, along with other Australian cities, is in fact a steal compared to New York, Paris, London and Singapore when it comes to food, housing, clothes, personal care and entertainment.

Except for one thing – booze. Getting one’s drink on is significantly more expensive Down Under than it is in the Old Dart with beer and wine the only items on the list of compared foods more than five per cent up on London. 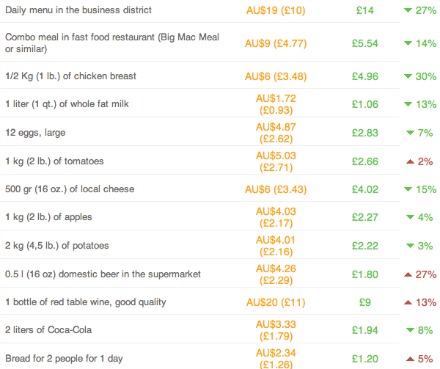 The information making up the statistics, the site says, is crowd-sourced from about 200,000 users giving a mean price for products and services we use in daily life.

The site claims, based on information from users, that Sydney and Melbourne are 25 per cent cheaper overall when the likes of rent, utilities, comparable clothing brands, public transport, fuel, a car and going to the movies are compared with London, but beer is 25 and 27 per cent more expensive.

Adelaide will leave you 34 per cent better off overall but has the biggest mark-up on local beer at 49 per cent more costly. Brisbane’s 27 per cent less costly and just 19 per cent worse for a brew while Perth is a 29 per cent mark down for life’s necessities but 25 per cent more for the amber stuff.

See below how London compares to New Zealand’s main centres as well as Paris and New York, which are both on the pricier side of Australian cities.

How much cheaper is your city than London?

To compare your home city with London, or any other combination of what the site claims is 1600 cities, click here.

Source: All info and graphics from www.expatistan.com/cost-of-living