Having enjoyed Jessica Swale’s new play (about the famous orange seller who became a leading Restoration actress) when it premiered in the broad outdoor expanse of Shakespeare’s  Globe last year (with a cheeky Gugu Mbatha-Raw as Nell)  I was in two minds as to whether a second visit would prove as rewarding. But I’m very happy to report that although Christopher Luscombe’s lively production was eminently well-suited to the larger space, it proves every bit as entertaining contained within the suitably decked out Apollo in the heart of the West End. Most of the cast remain, but this time round Gemma Arterton, a knowing twinkle in her eye, takes the lead – and does so with a charm, wit and sheer joie de vivre which could easily attract the roving eye of a promiscuous monarch.  Like her predecessor, she’s a delight to watch as she learns her craft from her leading man (Jay Taylor’s Charles Hart), then throws him over for David Sturzaker’s cocky King Charles II. A mention, too, for the comic talents of Michele Dotrice’s Nancy  (her faithful dresser reluctantly conscripted to perform on stage) and Greg Haiste’s resentful Kynaston whose services in the female roles are no longer required.

With his fake boobs, he wouldn’t have stood a chance getting a job with Mrs H. New comedy musical MRS HENDERSON PRESENTS follows the enterprising old lady’s business partnership with Jewish theatre manager Vivian van Damm (Ian Bartholomew ) as she converts an old cinema into the Windmill Theatre in 1937 and puts on “Revudeville”, a non-stop variety show from lunchtime to bedtime featuring – shock horror – naked women. To comply with the strict demands of the Lord Chamberlain, the girls had to remain perfectly still – and writer and director Terry Johnson’s adaptation (based on the 2005 film) makes sure there’s a generous helping of nudity – and not just in the carefully posed tableaux vivants. 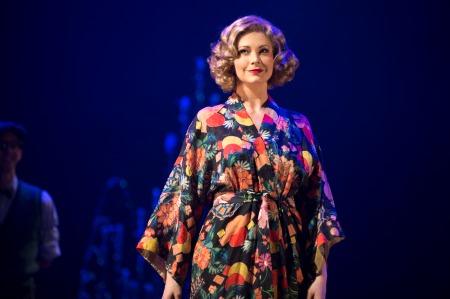 The characterisation – and plot – are as skimpy as the clothing as Tracie Bennett’s defiantly enterprising Mrs Henderson keeps her theatre open through the Blitz and the stage hands go off to war. But the pastiche period songs are pleasant enough and Emma Williams makes a likeable Maureen who arrives with tea and stays to strip.

I Love You, Man