Wimbledon highlights and predictions for 2010

Until a few years ago, there was only one possible answer to this question. It was, undoubtedly, the 1980 men’s final between Bjorn Borg and John McEnroe.

But in 2008, a new ‘greatest ever’ was confirmed, when Roger Federer and Rafael Nadal contested the longest men’s final – the Spaniard winning 9-7 in the fifth set to break Federer’s run of five straight Wimbledon titles.

Hopefully, there’s an encore this year.

In 1993, Jana Novotna completely dropped her bundle in the final against Steffi Graf and ended up blubbing on the Duchess of Kent’s shoulder during the presentation.

But for sheer theatre, it’s hard to overlook Jeff Tarango’s wild rant in 1995 – after receiving a code violation, the American turned his fury on the chair umpire Bruno Reubeh. Tarango demanded Reubeh be replaced, claiming he was “one of the most corrupt officials in the game” before storming off.

In 1985, a ginger-haired 17-year-old German called Boris Becker came from nowhere to win the title. It was a surprise rivalled in 1999, when Australia’s Jelena Dokic caused one of the biggest upsets in tennis history, routing world No 1 Martina Hingis 6-2 6-0 in the first round.

And then there’s Goran Ivanisevic. In 2001, just shy of his 30th birthday, the Croatian entered Wimbledon on a wild card and made it all the way to the final, where he beat Australia’s Pat Rafter in five sets. You couldn’t script it.

Poor Timmy Henman. Between 1998 and 2002, he made the semi-finals four times and, just as Britain begun to work themselves into a lather over the prospect of a first Grand Slam winner since Fred Perry in 1936, he loses.
And, as though he’s inherited the doomed hopes of an entire nation, Andy Murray must now shoulder that burden of expectation.
In 2010 … 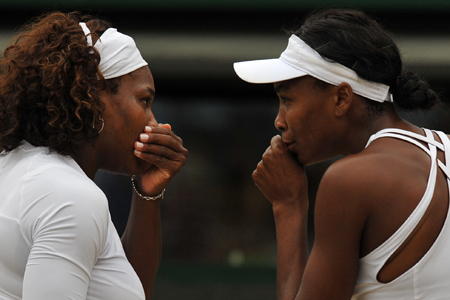 On the women’s side, the Williams sisters have won eight of the last 10 Wimbledon titles and they enter this year’s event as world No 1 and No 2 – it seems unwise to bet against them, making the final a family affair once again.

Among the men, this tournament is a chance for Nadal and Federer to add another chapter to their already storied rivalry – though not a fait acompli, there’s no reason they shouldn’t meet in the decider for the fourth time.

Lleyton Hewitt will talk up his chances until he’s dead in a ditch, and his quarter-final appearance last year is proof he can still compete at the highest level on grass. As the 15th seed, he should make it into the second week, but if he then meets Nadal or Federer, it will be curtains.

For Aussies, it’s all about Samantha Stosur (main image, opposite page). She should have won the French Open and is the form player. She has the power to go toe-to-toe with the Williams sisters and should go deep into the second week.

What about the Brits?

The Pommy pundits will pore over every inane detail for some sign that yes, this is finally the year. Are Andy’s shoulders slumping? What time of day does Andy like to play? Is Andy happy with the balls? At times, it will probably feel like there aren’t actually any other players in the tournament.

But the reality is that, while Murray is a very good player, he’s sharing the stage with two great ones. In the final analysis, this will mean the Brits have to wait at least another year.

There are 500 tickets for Centre Court and the show courts for sale every day – starting at £34 and increasing throughout the tournament – and you’ll probably need to queue overnight for those. If you want to camp out, get down to Wimbledon Park the night before. You’ll get woken up at about 6am and asked to queue outside gate 3 before the turnstiles open at 9.30am.

If that sounds like too much hard work, you might want to get a ground pass instead, which is still good value. There are 6000 ground passes for sale each day, but you still need to get there bright and early. Ground passes are £20 on the first day, but get cheaper as the tournament continues. Alternatively, you can pick one up for £14 if you wander down after work.

Travel diary: Get down and dirty at the Mud Fest in South Korea