Like the tragic King she portrays, she’s already celebrated her 80thbirthday, but when her androgynous Lear speaks, it’s as though she’s never been away, her voice commanding, anguished, angry, tender, vulnerable as the text demands. True, she doesn’t go as far as to carry the body of her loyal daughter Cordelia on stage, but otherwise there are no concessions to her age. It’s a tremendous performance, all the more moving when Lear’s senses desert him, his body fails and he finally crumples. 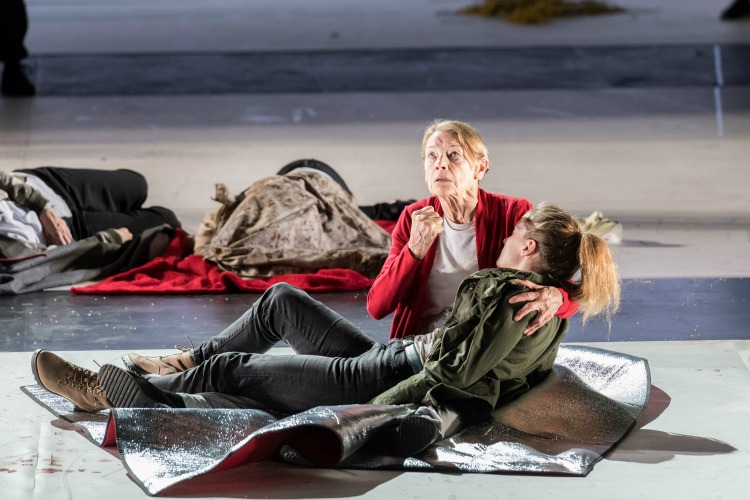 Deborah Warner’s modern-dress production begins in what could almost be a rehearsal space, the only props some functional plastic chairs and a scattering of trestle tables which are tipped over in front of moveable monochrome flats. The storm scene (a blizzard of undulating black plastic and flashing light) is electric, though.

Jane Horrocks makes a cruel, sexually voracious, white-blonde, high-heeled Regan, swift (like her sister Goneril ) to turn against her ageing father, whilst Rhys Ifans (clad in a tattered Superman outfit) proves an ultimately touching Fool. Harry Melling (Dudley Dursley in the Harry Potter films) gives a fearless, sometimes naked performance as Edgar – though quite why his illegitimate half-brother Edmond moons at the audience remains a mystery.

But, stripped to shirt and long woollen socks, this is Glenda’s night – a memorable comeback for an actress who has been away far too long but is still, amazingly, at the peak of her theatrical powers.

Theatre: Strangers on a Train