Relive your teenage dramas in front of a handful of strangers. It's fun … and a whole lot cheaper than therapy.

In the years before overly emotional Facebook status updates, angst-ridden tweets, colourful emoticons and online video ranting, teenagers would express their feelings and experiences in diaries.

At the end of a day, those with a bent for the written word would run pen over paper, detailing their expectations and neuroses as they tried to make sense of adolescence.

The diary would be shut in a symbolic closing of that particular day, its pages not to be read for some time, or, in some cases, ever.

That is until Cringe – a monthly London meeting where adults are invited to relive their most embarrassing teenage thoughts in public.

In the warm surrounds of the George pub in Central London, a crowd has gathered to hear a handful of diary-keepers serve up their most cringe-eliciting entries from years gone by.

The audience is hungry to lap up tales of social awkwardness, jealousy, obtuseness and good old-fashioned angst. They’re not disappointed.

Tim Jones, 44, delivers a smorgasbord of schoolyard character assassinations, especially towards a girl called Ursula. The teenage Jones derides his poor classmate’s “daft laugh“, her “acting posh“ and the fact most of her English efforts are “rubbish“.

By the time he reaches his climax – “most of the time she is just a complete bonehead“ – unfortunate Ursula has taken more bullets than 50 Cent..

The young Jones, coming across as an insightful chap, bemoans homework as a waste of time, analyses Shakespeare’s Jog on, Jog On as a literal ode to jogging, and comments that Raquel Welsh has a nice pair of … eyes.

He discovered they had and, as such, has been returning for the past two years, hooked on the feeling of sharing his witticisms of the past.

“My entries are more funny episodes – that’s more what blokes do,“ he says. “The whatever- happened-that-day sort of stuff. With girls, it’s more angsty shit about their boyfriends.“ (continues below) 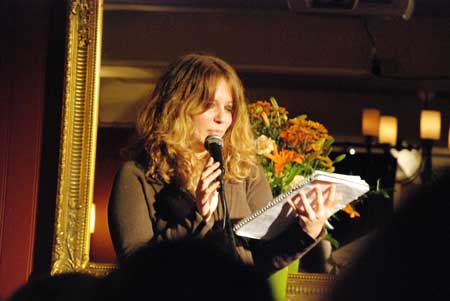 He’s dead right. Next up is 26-year-old Hannah Jones (above), a student midwife. Her reading recounts her teenage longing for an ex-boyfriend – or as she puts it “memories, fantasies and dreams of Alejandro“.

It’s stirring stuff and the audience sure cringes when the 16-year-old Jones writes, “my heart cries out for him, my body thirsts for him“ and then, in another rambling, scorns people who haven’t had sex yet.

“I think I lost my virginity relatively recently and was feeling pretty good about it,“ she explains.

Jones also details being perplexed at some of the tags bestowed upon the more nefarious members of society. “Paedophiles, murderers are labelled as evil scum. We should try our hardest to sympathise. Don’t hate. Don’t label,“ her teenage self had written, to the delight of the audience.

Then it’s the turn of Peter Collins, 59, who arrives so late he doesn’t even have time to gulp down a drink to steady his nerves. He needn’t have worried; the audience hangs on to his every word as he takes it though a journey of a young man trying to secure the affections of a local girl (or three).

“I really do sound like an imperialistic, male chauvinist pig,“ he confesses, as he refers to girls as ’colonies’ and his attempts to inhabit said colonies as ’campaigns’.

He’s rejected by one girl – so in a semi-stalkerish move organises his boyhood chums into an espionage network to find out who she’s else she’s seeing – and then details his feelings of social awkwardness as his mates hook into another he fancies.

“I head outside to work on my moon tan and lie there listening to Cream. Just because there’s a party going on inside doesn’t mean I have to be in there to enjoy it,“ the young Collins had defiantly written.

All this rejection is cringeworthy indeed and by the time he targets Laura, another local girl, the audience is unsure of how much more it can take.But the wily Collins conquers his latest ’colony’ and then proceeds to detail the thrill of young love, (first kisses, meeting the parents) with such earnestness that by the time it’s all over, the late bloomer has garnered the loudest applause of the night. (continues below) 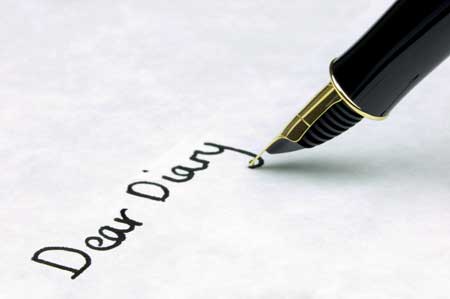 Compere Ana McLaughlin says the success of Cringe, aside from the appeal of cheap therapy, is that everyone has been a teenager and that no matter how cool or unpopular someone was, the sense of trying to fit in is universal.

“Everyone at that age basically has the same worries. Everyone’s going on about how their hair looks shit and ’that boy or girl doesn’t fancy me’ and ’I’m never going to pass my exams’.“

That the readings are true and part of a person’s individual history add value. Anyway, you couldn’t fake some of the stuff heard at Cringe.

“These aren’t comedians, these aren’t people who have written something to try and make you laugh. It’s actually written in deadly, deadly earnest. It’s completely not supposed to be funny and that’s what’s so funny about it,“ she says.

McLaughlin, 33, who helped to launch the London version of Cringe after meeting the concept’s New York originator, Sarah Brown, through her work as a publishing professional, remembers her first time reading.

“It was terrifying,“ she says. “There was a whole section about how very, very upset I am that Baywatch hadn’t recorded because at age 13, I had a brief but very passionate obsession with Billy Warlock who played Eddie – which I’d completely forgotten about until I opened the diary. I was basically a whole page of me swearing, not very convincingly, because I wasn’t any good at swearing.“

But, now a seasoned Cringe pro, she encourages others to get along to the George and share their tales with a bunch of strangers. Besides, she says, they won’t all be strangers at the end of the night, because they can all relate.

“Your horizons are so narrow at that age,“ McLaughin says. “Everything seems so important and I think with Cringe there’s an element of everyone sitting there going ’we’re really glad we don’t have to go through that again’ but ultimately realising that in the grand scheme things it really didn’t matter that much at all.“ ?

Cringe, monthly at The George